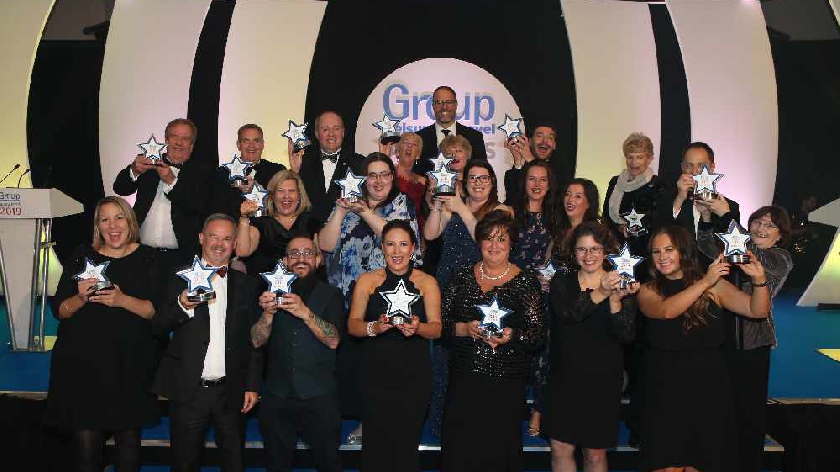 The winners of the 2019 Group Leisure & Travel Awards were honoured at a sparkling ceremony held in Milton Keynes on Wednesday, 9th October.

Showcased in Milton Keynes for the first time in its 23-year history, 21 accolades were presented at the DoubleTree by Hilton hotel at the Marshall Arena in Stadium MK.

Group Leisure & Travel is Britain’s leading monthly magazine for people who organise group trips and holidays including major sports and social clubs, retired groups, National Trust groups, PROBUS groups, Women’s Institutes, U3A groups, Rotary, Round Table plus a myriad of others, as well as groups of friends, family and like-minded people who travel together.

LEGOLAND Windsor Resort retained the title of the Best UK Attraction for Children & Families for the third year in a row, while Waddesdon Manor collected the Best Christmas Experience award for the second time.

It was a big night for the attractions and providers from Devon with the county voted the Best UK Destination for groups to visit, and India was the readers’ choice for Best International Destination, beating off competition from Belgium, China, France, Switzerland and Ireland.

Unsurprisingly, London also had its share of the honours, with a number of attractions picking up awards: the V&A was voted Best Museum or Gallery, Buckingham Palace emerged as the Best Historic Attraction or Venue, while the Houses of Parliament and the Coca-Cola London Eye went away with Best Guided Tour and Best UK Attraction respectively.

Individual awards were presented on the night to Ellie Fulcher of Fred. Olsen Cruise Lines who won The Excellence Award, for service to group travel organisers.

A special Outstanding Contribution to Group Travel Award was given to Dave Ashcroft of P&O Ferries, described as a “one company man, contributing to the success of an iconic brand since he joined them in the 1980s”.

The hotly anticipated and prestigious Group Travel Organiser of the Year Award® was awarded to Sue Shapland of the Exmoor Extroverts. Sue, who has been organising trips to destinations across the world for 20 years, was chosen by a judging panel for her commitment and passion in planning extraordinary outings and holidays for hundreds of people.

Group Leisure & Travel editor, Keeley Rodgers, said: “I want to congratulate all of our winners and finalists who go above and beyond to offer memorable experiences for groups. Group travel is an incredibly important part of UK and overseas travel and tourism and we are honoured to stage the main awards for the sector.

“Thank you to our readers, who have had their say on the best across the group leisure and travel industry, telling us who, what, where have made an impression on them and their members.”

For more information about the awards go to www.groupleisureandtravel.com/awards.