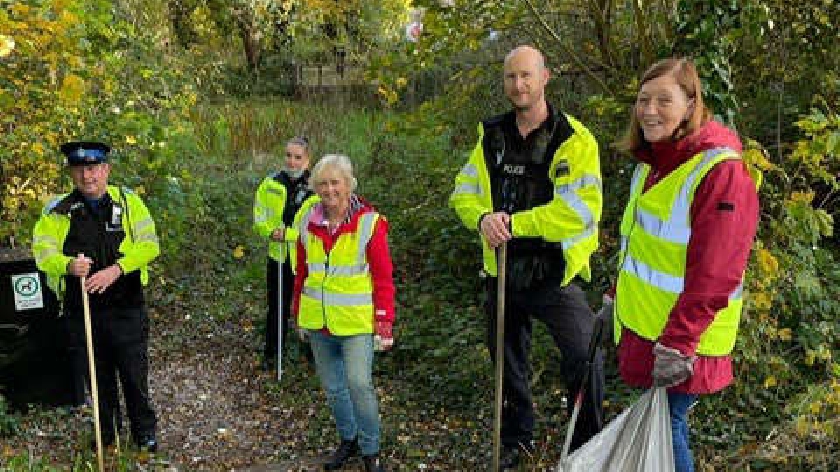 Cabinet Member for Public Realm, Labour Councillor Lauren Townsend, said: “The Progressive Alliance is fully committed to eradicating youth violence and knife crime across Milton Keynes, and operations such as this are vital in helping us achieve our goal.”

“Combined with the £250,000 the Council has dedicated to tackling knife crime this year, and the £100,000 last year which helped fund a new knife crime prevention learning zone at Hazard Alley, Operations such as Sceptre really help make a difference here in Milton Keynes.”

As part of the Operation, officers carried out park tidies (previously known as weapons sweeps) throughout the city, and councillors and other volunteers lent a hand.

Liberal Democrat Councillor Paul Trendall joined the park tidies in Campbell Park and Central Milton Keynes: “I’m grateful to have been able to help officers during their park tidies last week. These operations detect crime hotspots, and help to remove dangerous weapons from our streets.”

“The Progressive Alliance will continue to work with partner organisations to make Milton Keynes a safe place for all.”

Labour Councillors Pauline Wallis and Zoe Nolan supported police during the tidy in Conniburrow: “We’re so pleased to have been able to lend a hand last week, and help the Police as they work to make sure the city is kept safe.”

“It is important that councillors, organisations and residents continue to raise awareness of the dangers of carrying knives in their communities. This is especially important in schools, where the Police, Council and other SaferMK partners have been working hard to educate children and young people about the risks of carrying knives.”