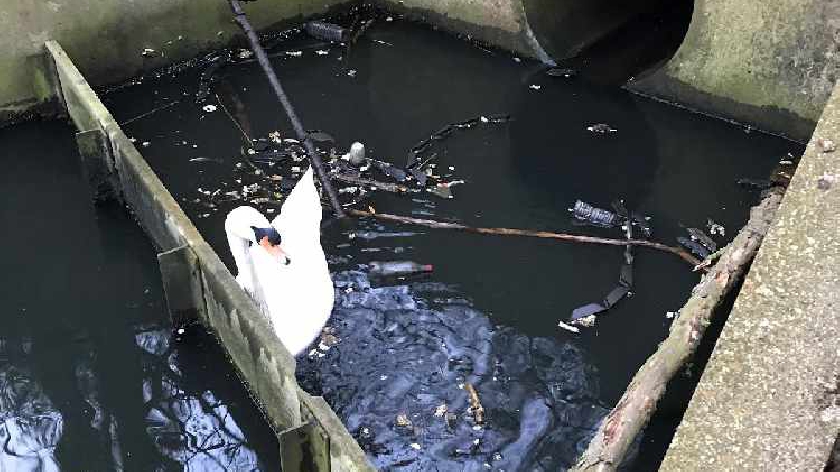 A swan had to be rescued by the RSPCA after getting itself stuck in an outlet pipe.

Earlier this month, residents spotted the struggling swan on Bond Avenue in Bletchley and called the RSPCA for help.

RSPCA Inspector Andy Eddy was able to help the bird over the concrete barrier and reunited the male swan with his partner.

Inspector Andy Eddy said: “It’s unclear how the swan got stuck in the first place, he could have been chasing another swan from his territory or perhaps he was looking for a place to nest. Either way, I’m glad that this story has a happy ending.

“This rescue is why we need to be very aware of the wildlife that call lakes and ponds home. I’m very grateful to the member of the public for spotting this swan and raising the alarm. He was unhurt by the ordeal and didn’t need any treatment - just a helping hand to get free!

“At this time of year, swans can be very territorial because they are looking for somewhere to nest. It’s important that the public give them space, and don’t disturb them or their nests. The litter that was around the swan when he was in the outlet pipe also poses a danger as they can get it caught around themselves, get stuck or swallow smaller pieces."

Litter is a large threat to wildlife. In 2020 the RSPCA took 3,874 calls about animals affected by litter, including 41 incidents in Buckinghamshire.

Head of the RSPCA’s wildlife department Adam Grogan said: “Litter is one of the biggest hazards our wildlife faces today and the pandemic has just added to the problem with many disposable masks just being discarded on the ground. These are a new danger to animals and we’ve been called out to rescue animals like ducks and gulls caught up in the masks’ elastic straps. That’s why we’re calling on the public to get involved in the Great British Spring Clean to help remove litter that may endanger animals.”

Because of the increasing threat of litter this year the charity is urging the public to join them in the Great British Spring Clean. To help make the environment a safer, better place by picking up litter when they see it or pledging their support.