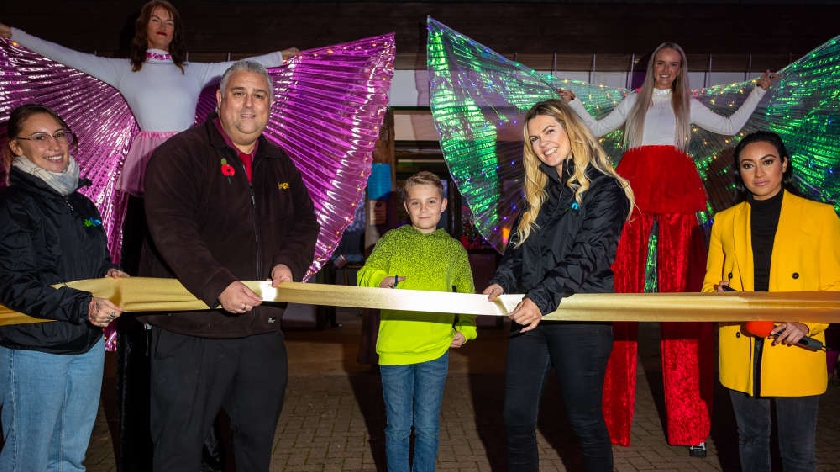 A ten-year-old boy who overcame a rare form of cancer during the pandemic has officially opened the city’s Land of Lights festival at Gulliver’s Land Resort in Milton Keynes.

Local boy Ronnie Sherwood was nominated to open the festival by the Henry Allen Trust – a charity which supports children, teens, young adults and their families battling childhood cancer.

Diagnosed with Wilms Tumour – a rare form of kidney cancer in children – just before the first Covid19 lockdown, Ronnie went through 40 weeks of chemotherapy, two operations to remove kidney and lung nodules, and eight rounds of radiation to his chest, due to the cancer spreading into his lungs.

He is now 18 months off treatment and, as the charity stated in its nomination, a super-hero.

Ronnie officially opened the Land of Lights Festival, cutting the ribbon in front of a crowd of onlookers.

Gulliver’s Land also presented him with 20 Golden Tickets for the Land of Lights event, which runs until February 2023.

However, kindhearted Ronnie has chosen to regift the tickets back to the Henry Allen Trust, so more families who are going through childhood cancer can enjoy a night out together at the festival.

Louise Sherwood, Ronnie’s mum, said: “It was such a fantastic surprise for Ronnie to be chosen to open Land of Lights. As he went through all of his treatment during the pandemic, we weren’t able to give him many treats, so it was wonderful to have this experience.

“It was also a great opportunity for Ronnie to be reminded of just what he has achieved in beating his cancer. He often forgets, or doesn’t realise, but he has been through such a lot – especially as a 10-year-old boy.

“It was so lovely of the Henry Allen Trust to nominate him and for Gulliver’s to put on such a warm welcome for us all, and we hope by regifting the Golden Tickets, other families like ours can enjoy a magical evening out together, too.”

Land of Lights is taking place at Gulliver’s Land Resort in Milton Keynes until 26 February 2023, and includes 12 vivid dreamworlds featuring gigantic lanterns inspired by animals, mega monuments and wonders of the natural world.

Guests can explore one mile of amazing light installations, which include over 50,000 LED lights. The experience also features an eclectic mix of music and entertainment, as well as a wide selection of street food and seasonal drink options .

More than 100 people are involved in the production process undertaken by Zigong Lantern Group, which takes three months to finish as each lantern is carefully handcrafted by skilled artisans.

“What he has been through is incredible, his story is so moving, and the fact that he has chosen to regift his tickets to other families who are going through such tough times is testament to what a wonderful young man he is.”