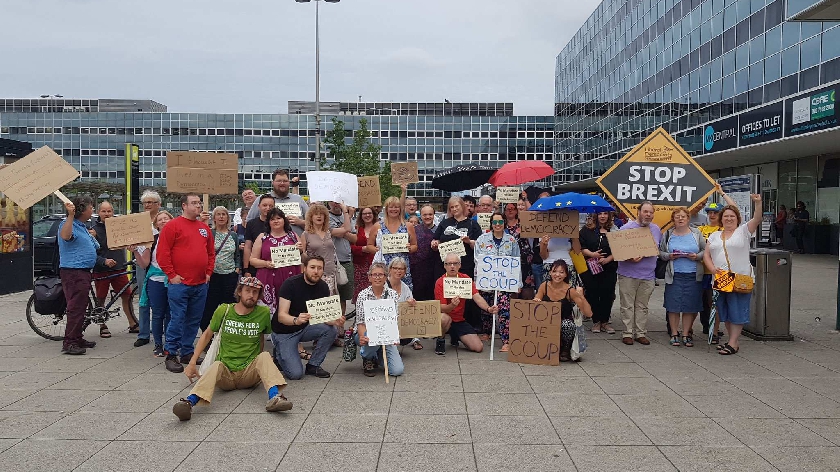 Members of the European Movement Milton Keynes undertook a protest at Milton Keynes Train Station this evening to campaign against Boris Johnson's decision to suspend parliament from the middle of next month.

Activists from across the city gathered at the demonstration which was only organised today following Mr Johnson's announcement earlier.

The group say they were joined by members of the Milton Keynes Liberal Democrats, Green Party and Labour Party as well as those with no party affiliation.

Under plans agreed to by the Queen today, parliament will be suspended in the week beginning 9 September until 14 October.

This is the date on which a new Queen's Speech - detailing the legislative agenda of Mr Johnson's administration - will be held.

Her Majesty approved the government's request for a five-week prorogation at a meeting of the Privy Council at Balmoral Castle, Scotland, on Wednesday.

Asked if he was denying opposition MPs the time to stop a no-deal Brexit, the prime minister said: "No, that is completely untrue.

"We are bringing forward a new legislative programme on crime, hospitals, making sure we have the education funding we need."

He added there would be "ample time" for MPs to debate Brexit both before and after a "crucial" Brussels summit of EU leaders on 17 October.

Conservative Party chairman James Cleverly also downplayed the significance of the action, claiming the government was planning a Queen's Speech "just as all new governments do".

Downing Street pointed to the fact the current session of parliament, which began in June 2017, is the longest since the Civil War.

The DUP - who prop up the Conservative government at Westminster - welcomed the announcement of a Queen's Speech, prior to which their confidence and supply agreement with the Tories will be reviewed.

However, House of Commons Speaker John Bercow claimed it was "blindingly obvious that the purpose of prorogation now would be to stop parliament debating Brexit and performing its duty in shaping a course for the country".

He called it a "constitutional outrage".

Labour leader Jeremy Corbyn said: "I am appalled at the recklessness of Johnson's government, which talks about sovereignty and yet is seeking to suspend parliament to avoid scrutiny of its plans for a reckless no deal Brexit.

"This is an outrage and a threat to our democracy.

"That is why Labour has been working across parliament to hold this reckless government to account, and prevent a disastrous no deal which parliament has already ruled out.

"If Johnson has confidence in his plans he should put them to the people in a general election or public vote."

The prime minister has promised to take the UK out of the EU on Halloween "do or die", despite a majority of the House of Commons being opposed to a no-deal Brexit.

He has regularly repeated his commitment to securing a new Brexit deal with Brussels.

But Mr Johnson has insisted to EU leaders the controversial Irish border backstop must be ditched from the existing withdrawal agreement, agreed between the bloc and ex-prime minister Theresa May.

In a letter sent to all MPs, the prime minister said legislation to ratify a new Brexit deal will be the "central feature" of the Queen's Speech, if an agreement is reached.

"These weeks leading up to the European Council on 17/18 October are vitally important for the sake of my negotiations with the EU," he added.

"Member states are watching what parliament does with great interest and it is only by showing unity and resolve that we stand a chance of securing a new deal that can be passed by parliament."

The suspension of parliament from the middle of next month will see MPs lose a number of days at Westminster, during which they could have attempted to legislate against a no-deal Brexit.

Mr Corbyn yesterday met with a coalition of party leaders and senior MPs opposed to no deal.

The group agreed they should focus on trying to pass legislation forcing the prime minister to seek a further extension to the Article 50 negotiating Brexit - thereby delaying the UK's exit beyond 31 October - in order to avoid no deal.

Mr Corbyn had originally planned to table a no-confidence motion in Mr Johnson's government soon after MPs return to Westminster from their summer break next week.

He had appeared to shelve this plan following Tuesday's meeting, but could now return to the effort to oust Mr Johnson from 10 Downing Street.

Brexit Party leader Nigel Farage predicted such a scenario, posting on Twitter: "The government's announcement today makes a confidence motion now certain, a general election more likely and is seen as a positive move by Brexiteers."

US President Donald Trump warned Mr Corbyn away from such a move, posting on Twitter: "Would be very hard for Jeremy Corbyn, the leader of Britain's Labour Party, to seek a no-confidence vote against New Prime Minister Boris Johnson, especially in light of the fact that Boris is exactly what the U.K. has been looking for, & will prove to be 'a great one!' Love U.K."

Former chancellor Philip Hammond was also among those to claim it would be a "constitutional outrage" if parliament were "prevented from holding the government to account at a time of national crisis".

He predicted a judicial review could be brought against Mr Johnson's suspension of parliament, but admitted it was "fairly difficult" to see how it would succeed.

However, with the prospect of a no-confidence vote in the government, Mr Grieve suggested today's action could encourage fellow Conservative MPs to "stand up for the national interest".

His party leader, Jo Swinson, said: "Shutting down Parliament would be an act of cowardice from Boris Johnson.

"He knows the people would not choose a no deal and that elected representatives wouldn't allow it. He is trying to stifle their voices."

Sky News' royal correspondent Rhiannon Mills said: "It is Her Majesty's government, so only the Queen can effectively press the red button to prorogue parliament.

"She's done it many times throughout her reign.

"But this is so controversial because, in effect, it looks like the government is using the Queen to try and put a stop to any potential actions by MPs."