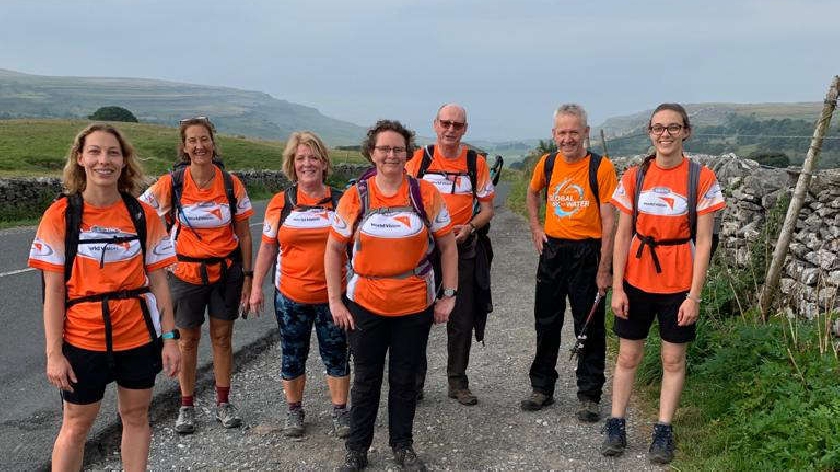 A team of seven World Vision staff members joined in the charity’s Global 6K for Water with a difference after completing the 24-mile Yorkshire Three Peaks challenge.

The team has managed to raise £2,500 for the charity so far on JustGiving.

Six kilometres (3.5 miles) represents the distance many young children in developing communities around the world have to walk to collect water, but the World Vision Warriors chose to go the extra mile(s) to help bring vital water supplies in the world’s poorest communities.

The challenging hike took the group 12 hours to complete - including time stopped at the three ascents and three descents of Pen-y-ghent, Whernside and Ingleborough to take in the spectacular views.

Janet Watt, who spearheaded the team’s participation says: “I was so pleased to find colleagues as crazy as I am – willing to push themselves to the limit to raise money to bring life-saving water to vulnerable communities.

"We’ve been building up to the challenge for a couple of months, and the support we have seen from our colleagues, friends and family was extremely encouraging. We are extremely grateful for all donations we have received.

"I also want to say a huge thanks and congratulations to my fellow Warriors. The course was relentless and challenging but with such a great team on board, we completed it, and made it home with tales to tell and blisters to prove it!”

Mark Sheard, CEO of World Vision UK says: “Children and communities face daily dangers just getting access to water in poorer countries – something we take for granted in the UK. The Global 6K for Water is just one way the generous public can help support our work to bring vital clean water to these communities.

"We are always delighted when organisations sign up to take part in our fundraisers, but it really does feel extra special when staff also get involved and fundraise for our worthy causes. We are all so proud of what the Warriors have been able to achieve.”

Find out more information on the Global 6K for Water and sign up here.