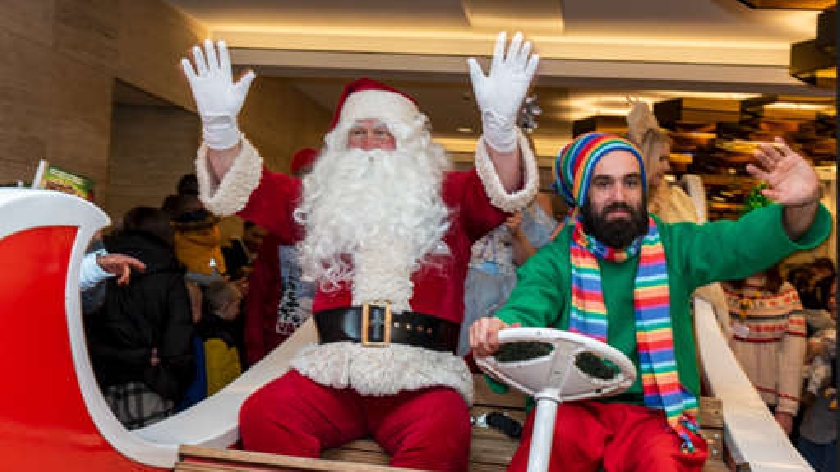 On Friday 18th November, Santa will return to centre:mk, as his trusty reindeers drop him down into Milton Keynes.

Santa is set to make his way back to Milton Keynes next week, travelling in his sleigh through the centre, to declare this year’s Santa’s Grotto officially open.

The free event is a great way for everyone to see Santa, as he waves to the crowds, giving out centre:mk gift cards to lucky families along the way.

The event will start in City Square, outside Marks and Spencer from 4.45pm where guests can enjoy entertainment including music from MK’s very own local band ‘The Stencil Pencils’, who have gone from strength to strength since 2020 when ‘The World's Youngest Asperger’s Band' started releasing their own music.

Now with a host of famous fans, including Becky Hill and Ed Sheeran, they recently performed alongside Sam Ryder at The Festival of Light.

Prince Charming and Snow White from Milton Keynes Theatre’s pantomime will also be joining in the fun and entertaining the crowd before the arrival of Santa himself.

Santa’s sleigh ride along Midsummer Arcade to Middleton Hall gives everyone a chance to get involved and see Santa get ready to make his pre-Christmas home in this year’s wonderfully nostalgic ‘The Snowman™’ themed grotto, where he will be welcoming families to this new adventure.

Local band the Stencil Pencils will also be performing for families and friends while Santa arrives.

The young band, made up of Indiana Harris-Herbert, her brother Johnson and brother Kale who has Asperger’s syndrome, have made local and national headlines since forming back in 2020.

The band are back in their home town of Milton Keynes after a summer of performing at festivals and most recently with Eurovision star Sam Ryder at the local city celebration.

Centre Director Kevin Duffy said, “Santa’s arrival at centre:mk, is a wonderful experience and marks the start of the magical festive season. It’s the chance for children to see a glimpse of Santa before he goes into the grotto and to have a really good time with the free entertainment, music and fun.

"We hope that this event will create many magical memories for everyone who attends.”

The centre:mk Santa Parade is free to attend, whilst tickets are available to purchase to meet Santa in this years The Snowman™ Grotto experience online at centremk.com.