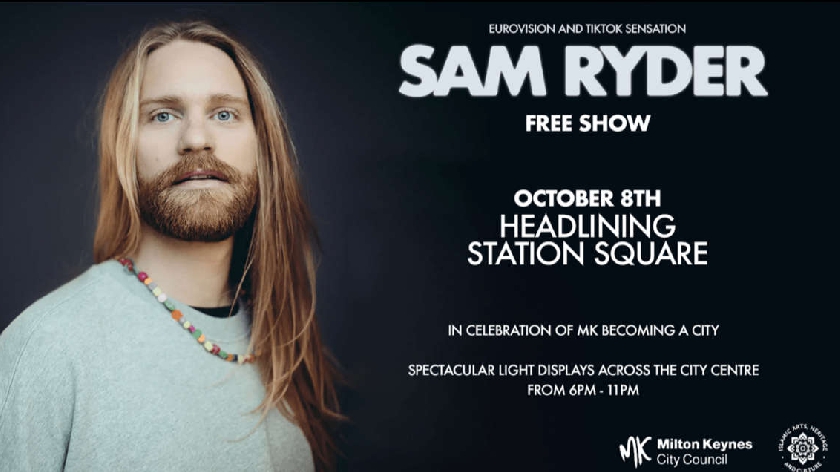 A huge free festival is taking place in Milton Keynes this October to celebrate city status and Sam Ryder has been announced as a headline act.

The City of Codes & Light Festival has been organised by Milton Keynes Islamic Arts and Culture (MKIAC) in partnership with local cultural institutions including Milton Keynes City Council, who has teamed up with MKIAC to present a memorable festival finale from 6pm on Saturday 8th October.

Sam Ryder stunned global audiences in May with the anthem Space Man to earn the UK our best Eurovision result for 20 years. He’ll be wowing the crowds at 10pm on the Station Square music stage, showcasing music from his new album There’s Nothing But Space, Man (released on 18 November) as well as tracks loved by his incredible 13 million Tik Tok followers. Sam will be followed by a fantastic laser show before the event ends at 11pm.

All evening there’ll be live performances at Station Square including thrilling music from the Royal Philharmonic Orchestra and the Ibiza Orchestra, and a laser show at 8.50pm - repeated at 10.45pm. The Square will also be home to food and coffee trucks serving tasty treats from 6pm.

Back in May, it was announced that Milton Keynes was being crowned official city status and now, everyone is being invited to the city centre for a family-friendly evening of free live music, performances and a brilliant light display.

The festival, which kicks off on Tuesday 4 October, will offer a captivating blend of media, music and movement, with special light shows organised by award-winning visual projection companies at venues across MK including Bletchley Park.

Anouar Kassim MBE, Founder and Director of MKIAC said: “Thanks to the Arts Council England and Milton Keynes Council, we can celebrate MK’s innovation and technological history as well as our newly acquired city status.

"This festival brings diverse communities together, so we are incredibly proud to have the responsibility of celebrating such a fantastic achievement. We cannot wait to welcome everyone to the multiple exciting events taking place throughout the first week of October and we would like to encourage all members of the community to join us. It promises to be a celebration like no other.”

Leader of Milton Keynes Council, Cllr Pete Marland, said, “In our bid for city status presented to Queen Elizabeth II, we described Milton Keynes as a ‘mosaic of communities united by a love of where we live’. This spectacular parade and light show will be an opportunity for everyone to unite in celebration of our becoming a city, and to enjoy a brilliant evening of free music and entertainment.

"The MKIAC have staged fantastic events in previous years, and we are working with them to create an even bigger festival finale as a special way to remember this historic year.”

There will be lots of events taking place including an environmental and wellbeing discussion at Milton Keynes College, an illuminating light projection at Bletchley Park and a concert at Church of Christ the Cornerstone by Aashiq Al-Rasul.

You can find out more here.