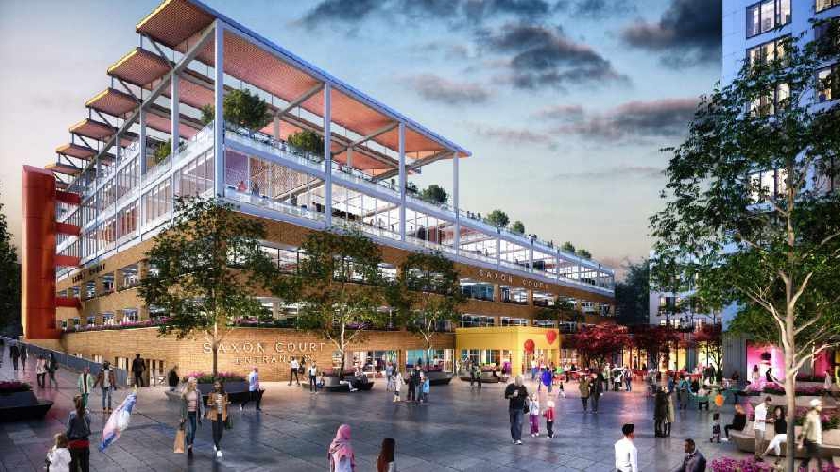 A virtual exhibition has been launched to allow residents to view the emerging £190 million plans for the future of Saxon Court.

Developers wish to convert the former council office building into an iconic mixed-use development with 287 new homes, shops, cafes, and more in a 27-storey tower block.

First Base, the developers, and Patron Capital, the investors, acquired Saxon Court from Milton Keynes Council in October 2020.

They have since allowed Saxon Court to be transformed into a temporary mass vaccination centre during the pandemic, but their future plans are to deliver a "beautifully designed and highly sustainable development".

The developers say that over 1,500 residents have already taken part in the public consultation, which has had an “overwhelmingly positive response", but they are seeking more input from residents.

That is why they have launched a computer-generated exhibition as another step forward during the planning process.

Set within a virtual Saxon Court atrium, the online gallery will incorporate 10 exhibition boards detailing and illustrating the redevelopment plans of the former council building.

Steve Eccles, Project Director at First Base, said: "Our redevelopment plans are in alignment with Milton Keynes’ Strategy for 2050.

“Our objective is to retain and enhance the identity of Saxon Court, while embracing everything that makes the city great into its new design, and it is vital that we continue to involve the people of Milton Keynes every step of the way.”

First Base claims that the development will create around 2,000 jobs, with £190 million invested to fuel the long-term evolution of Milton Keynes as a city of the future.

They add that the proposals are projected to generate £7.3m in local spend from residents and employees and £2.3m in Council Tax over five years.

A spokesperson for First Base added: "Within the next 20 years, the redevelopment of Saxon Court will also deliver over £300m in social value, providing long-term community benefits from local employment and training opportunities and improvements to local health, wellbeing and the environment."

But despite these forward-thinking plans, a council meeting heard that the 250,000 sq ft Saxon Court site will not come with its own parking spaces.

Marc Corbett, Project Director at First Base, said: "The analysis has been done and there is the capacity to support the scheme in the car parking.”

But like other developments where offices have been turned into homes, the company will have to provide evidence for why they do not need to apply the council’s parking standards.

“We are in discussions with the council on this matter,” added Mr Corbett.

The Virtual Public Exhibition is now live and can be viewed here.

And throughout March, members of the public will also be invited to join Virtual Town Hall events, and developers are now hoping that people will get involved with the consultation process.

People can have their say by filling out an online questionnaire here, by emailing consult@saxoncourtmk.com, or by visiting https://saxoncourtmk.com/.