Portrait of Sir Tom Moore by Milton Keynes artist part of auction which raised £17,000 for the NHS 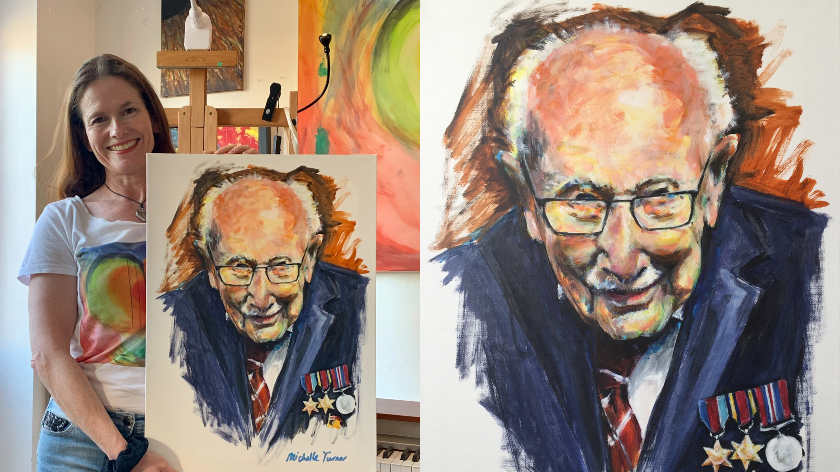 A portrait of Sir Tom Moore, the war veteran who raised £32million for the NHS, is now taking pride of place in the Chelsea and Westminster hospital.

Local Olney artist, Michelle Turner, created the portrait as part of an art class she runs and the response to the piece has been exceptional.

The artwork was created as part of her regular online art class as Michelle explains: “Captain Tom as he was a few months ago had completely captured the nation’s heart so I decided to focus my class on him. I posted my work in progress images as usual and when it was finished the response to my (now) Captain Sir Tom’s portrait was incredible."

“It was at this point I decided I needed to auction the painting with all proceeds going to the NHS. I was put in touch with Karina Phillips who was hosting an auction with Paul Stafford and Robin Hutchinson coinciding with Florence Nightingale’s 200th birthday, whichI felt was very apt.”

Michelle put the painting forward to the ‘Artists for the NHS’ auction, hosted by Gallery Different and all funds raised went to Meals for the NHS. The auction raised over £17,000.

In an interesting twist, the portrait was purchased by a Mr John Slack, who lives in Jakarta, Indonesia, having left the UK 45 years ago. John said: “Like millions of others we saw Sir Tom's fund raising efforts balloon out of all expectations. His iconic image was then brilliantly captured by Michelle. I immediately thought it was a great idea and made a bid.”

Once purchased, John decided that the painting needed to stay in the UK and asked Michelle for suggestions as to where it could be displayed.

As it turned out Michelle had recently discovered that she knew Claire Alajooz, senior physician, who is Sir Tom’s GP and also part of the NHS team that inspired his fundraising.

She asked Claire if she could suggest a hospital pertinent to Sir Tom. Claire contacted Chelsea and Westminster hospital in London who were delighted to receive the painting.

“We are immensely grateful to him, to Michelle the artist and to John Slack, who has gifted this wonderful portrait to the Trust. We are proud and grateful to be able to display the portrait at the hospital - it will be an honour for all of us to walk alongside him every day.”

So through talent, friendship and John in Jakarta, Sir Tom will adorn the walls of the Chelsea and Westminster hospital for years to come. The portrait will be a constant reminder of what he achieved for the NHS during an incredibly difficult time in UK history.