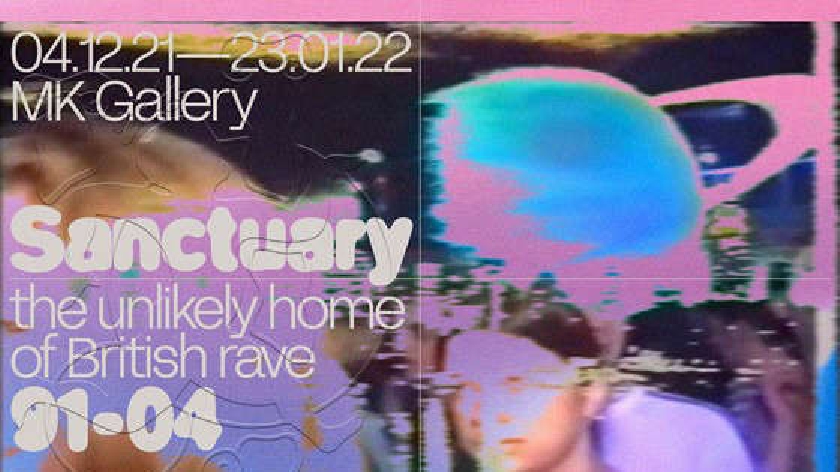 A new exhibition celebrating The Sanctuary, Britain’s iconic lost rave venue is coming to The Project Space at MK Gallery.

How did an unsuspecting Milton Keynes warehouse become one of the UK’s largest and most beloved rave venues?

Sanctuary: The Unlikely Home of British Rave will tell the story of the infamous all-night club that operated in the city from 1991-2004, drawing an estimated three quarters of a million ravers from across the country.

Created by Emma Hope Allwood, writer and former Dazed editor who grew up around Milton Keynes, the exhibition focuses on an all-night club that ran in MK from 1991 to 2004.

The exhibition seeks to shine new light on the pioneering nightlife history of the city – including the MK locals behind Sunrise, the acid house promoters known for a string of underground raves in the late 1980s.

Opening on the 4 December 2021, it will also mark 30 years to the week since the building in Denbigh North was first chosen by the late Murray 2 of 5 Beetson as the venue of the historic Dreamscape 1 rave, before opening officially as a club the following year.

It is estimated that the old club pulled in a million ravers from across the UK during its prime and is known for hosting iconic nights including big names such as The Prodigy, Paul Weller, The Cult and more.

Due to plans to redevelop the area, the Sanctuary closed its doors on 10th July 2004.

The building was eventually demolished to make way for the IKEA store.

Emma Allwood said: "“It wasn’t until I became a journalist and came across the flyer for Dreamscape 1 that I learned of The Sanctuary, for me, this project is about doing justice to the youth culture history of MK – a place which is too often unfairly maligned as a cultural void.”

Former ravers with any objects to be considered for the exhibition are invited to either email details to submissions@sanctuarymk.co.uk or bring their ephemera to MK Gallery on Saturday 13 November, 2pm – 5pm, where it will be scanned and preserved within the virtual archives of the Museum of Youth Culture.

From photographs to flyers, VHS tapes to t-shirts, Milton Keynes 90s rave and nightlife keepsakes, nothing will be insignificant.

This will be followed by a free screening of Turner Prize winning artist Jeremy Deller’s 2018 exploration of acid house, Everybody in the Place: An Incomplete History of Britain 1984-1992 in the Gallery’s Sky Room cinema at 5pm.