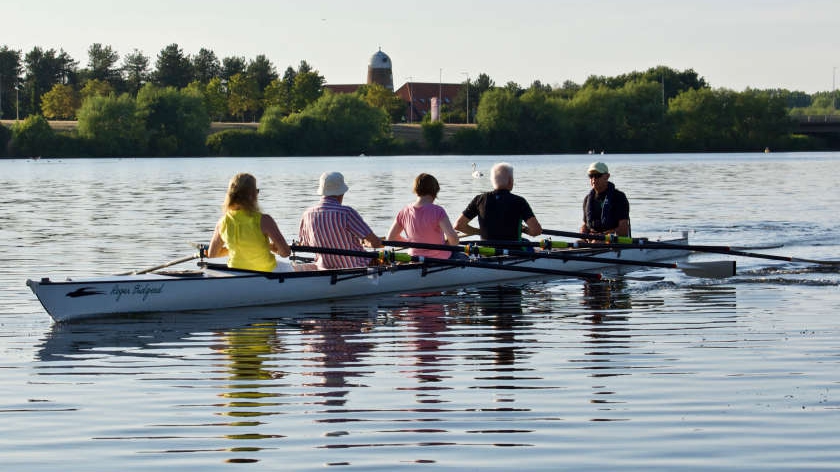 The latest addition to MK’s Rowing Club ‘fleet” is a stable quad named in honour of the late Roger Bidgood.

Roger began his rowing career 60 years ago on the River Avon and subsequently became a long-standing and highly valued member of the Milton Keynes club at Caldecotte Lake.

In addition to his own personal success as a rower, winning Bronze at the British Indoor Rowing Championships in 2000, he was passionate about helping people learn to row, having great patience and the ability to inspire confidence. He was also captain of the club’s Recreational group and organised many fun rowing trips both in this country and overseas.

The new boat, named ‘Roger Bidgood’, can seat a four-person crew plus a cox and is extra wide to provide a stable base making it perfect for people learning to row and for longer distance recreational rowing trips, so a perfect tribute to Roger.

The club purchased the boat after generous donations from Roger’s family and friends, club members, and a grant from the Milton Keynes Community Foundation.

Roger’s daughter, Juliet Bidgood, attended the official naming of the boat earlier this year saying “It is fantastic that Roger will have a legacy with Milton Keynes Rowing Club out on the water where he so enjoyed spending time.

"Being a sportsman was an important part of his life and he was keen to share his skill, teaching beginners rowing at the club."

She added, "Roger would have been so proud and honoured to see a boat named after him…and we would like to thank everyone for their kind donations to the boat fund and to MK Community Foundation for awarding funding.

"We wish all those who use the boat, fine rowing and hope many more new recreational rowers will be able to discover or rediscover a passion for rowing.“

MK Rowing Club captain Karen Wilson said, "I’m delighted we’ve been able to raise the funds for this boat which will be a great asset teaching beginners how to row in a crew.

"It seems fitting to name this boat after someone who dedicated so much of their time to coaching others."