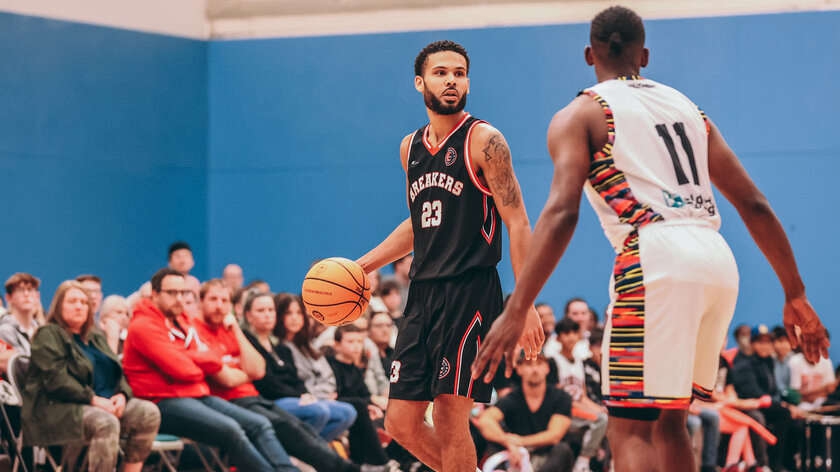 It was another historical weekend for the Milton Keynes Breakers as they struck down the University of Hertfordshire Storm on Saturday evening before beating NBL D1’s Bradford Dragons in OT to progress to the 5th round of the National Cup.

The first game of a double header against last year’s 2nd place side lived up to expectations as the Breakers put on a professional display to see them improve to 5-0 on the season and claim 1st place of NBL D3 East. 92-68.

Star guard Dante Langley (14pts) got off to another hot start for the Breakers: putting up the first points of the game with a flashy reverse lay-up, beating multiple defenders. A showcase of prototypical Breakers’ basketball saw the MK contingent find Blayne Freckleton beyond-the-arc in a sequence where the ball barely touched the court.

Following from this was another impressive lay-up from Langley in which he absorbed contact from a bigger defender and still finish with ease. Langley celebrated the basket with a flex of both arms and a mean mug; the Breakers looked set to dominate once again. The visitors from Hertfordshire would not go down easy however: baskets from Ayinla, Osisoma and standout Kavell Hawes (24pts) brought them back to within range and the two sides would begin a fiery duel that fit the bill of what a 1st and 2nd place game should be. 25-14.

The second quarter was where the Breakers’ leading scorer William Issekya (21pts) made his mark: scoring three baskets in a row after entering the game in what was arguably his best performance in a Breakers uniform. The middle of this quarter is where the home-side were truly put to the test: despite finding a lot of success on the offensive end, the Storm’s backcourt was able to make plays and chip away at the deficit to bring it to an 8-point game in what was their highest scoring quarter of the game (19pts).

Once again, in what has become a common theme this season thus far, the Breakers were able to get stops when it counted and ended the quarter with a 17-point lead. 50-33.

Breakers’ academy players, William Issekya and Buai Luak, put on a spectacular display in the 3rd quarter. Issekya knocked down back-to-back triples in the period that demonstrated the Breakers’ sublime offence at its best. Luak scored the final 9 points of the quarter for the Breakers, capping it off with my play of the game. A sequence of slick ball movement ultimately found Luak behind the arc for a buzzer-beating shot that had the crowd up from their seats. 75-45.

Overturning a 30-point deficit heading into the fourth quarter is a tall order, but the Storm still put forward a valiant effort. Ultimately, it was not enough to stifle the Breakers, who are now the sole undefeated team in NBL D3 East. 92-68.

Coach Beddow’s side couldn’t be in better form heading into their next league game against West Suffolk Wolves. The Wolves are yet to win a game in three attempts and thus will be ready to give the league-leaders their best shot on their home court.

The second leg of the weekend was one for the history books: the Breakers welcomed D1 side Bradford Dragons to Bletchley Leisure Centre for the 4th round tie of the National Cup in what always promised to be an explosive affair.

Touted as underdogs, the Breakers showed their class as one of the NBL’s premier sides, regardless of division, in one of the most exciting games of basketball Milton Keynes has hosted in several years.

The Dragons opened the scoring, going 5-0 to start the game thanks to made baskets from captain Ricky Fetske (14pts) and British guard Jermayne Laing (10pts). It didn’t take long for the Breakers to kick into gear: triples from Dante Langley (16pts) and Michael New Jr. (11pts) swung the lead into the Breakers favour, marking the start of a long stretch where this would remain the case.

Langley and Luke Gregory were the Breakers’ most effective players in this early stretch with the latter scoring the final 6 points of the quarter for his team to take an early 5pt lead. Dragons guard Jordan Whelan had a noticeably quiet quarter, only scoring once – an unusual sight for the former-BBL man. 27-22.

To start the second quarter, head coach Billy Beddow made his first substitution of the game bringing on academy product William Issekya, who had impressed the night before with a 21pt showing. The new line-up that took shape saw New Jr. move to the centre position as the Breakers went small line-up in the hope of capitalising on the less agile defenders of the Dragons.

Both teams failed to score in the first minute of the quarter until Breakers leading scorer, Jordan Spencer (22pts) drained a three-pointer to extend the lead to 8. Spencer was integral in the offence of the Breakers, following his make with a pass out to Issekya for a corner 3 point-shot, giving the Breakers their first double-digit lead of the game.

An intelligent cut by New Jr. allowed Spencer to make an easy find under the basket to continue the offensive charge by the Breakers, extending the lead to 13. The Dragons would eventually find their rhythm once again, with two and-one players to keep the home-side within reach.

A stretch of good defence from both teams meant the score line would stagnate until the academy duo of Issekya and Luak combined for a high-effort basket where Luak grabbed an offensive rebound and passed it off for Issekya for an easy lay-up. The two would link-up on the next play once again when Luak found the paint wide open and Issekya found him again for a two-handed slam. In the dying seconds of the half, Richard Sulcs (21pts) converted a tough lay-up through contact and made the bonus shot to cut the Breakers’ lead to 7. 45-38.

The third quarter was the lowest scoring of the game, and the Breakers’ poorest – only managing 9 points: their only single-digit scoring in a quarter in the 22/23 campaign so far. The Dragons won the scrappy period by 3 points, closing their deficit down to 4 heading into the final 10 minutes. 54-50.

The following 15 minutes of basketball were nothing short of electrifying, Dragons’ star-man Jordan Whelan found his rhythm and the game grew closer and closer. The Breakers offence kept ticking, thanks in large part to a sizzling showcase by captain Jordan Spencer. #23 hit three treys in succession, lighting a fire under the feet of the sell-out crowd. The Dragons however, managed to keep pace with the Breakers and back-to-back baskets from Jordan Whelan gave the Dragons their first lead since the opening moments of the game at 73-75.

The ensuing moments are nothing short of spectacular: Coach Beddow called timeout with 14 seconds to go and trailing by 2 points. Coach Beddow called upon captain Spencer, who delivered in crunch time, driving to the basket to tie the game with 9 seconds remaining, drawing a foul in the process.

Spencer missed the ensuing free-throw, but with lightning quick speed, the captain caught his own rebound, and the ball reached the hands of Langley who was fouled. The call was controversially deemed to be a non-shooting foul with just 0.7 seconds left on the clock and the scores knotted at 75. New Jr managed to get off a rushed 3-point effort, but drew iron, and the game was headed to overtime.

The overtime period was just as intense, Richard Sulcs would make a difficult lay-up through contact to make his own and-1 play, which, he too, converted. After ‘shushing’ the crowd, he would receive his 5th personal foul on Breakers’ Blayne Freckleton (15pts) who had struggled with his shot all night. Freckleton stepped up to the line and made the shots when it mattered most. The remaining minutes of the side saw lockdown defence from the Breakers that kept the Dragons to only 5 points in overtime, while they managed 11 of their own to close out the game and complete the upset.

The Breakers move into the fifth round of the cup and are one of only two Division 3 sides left in the competition. They will take on another D1 opponent in Team Newcastle away from home on Sunday 4th December. The Breakers' next home game is Sunday 27th November, 5pm tip off vs the Northamptonshire Titans.