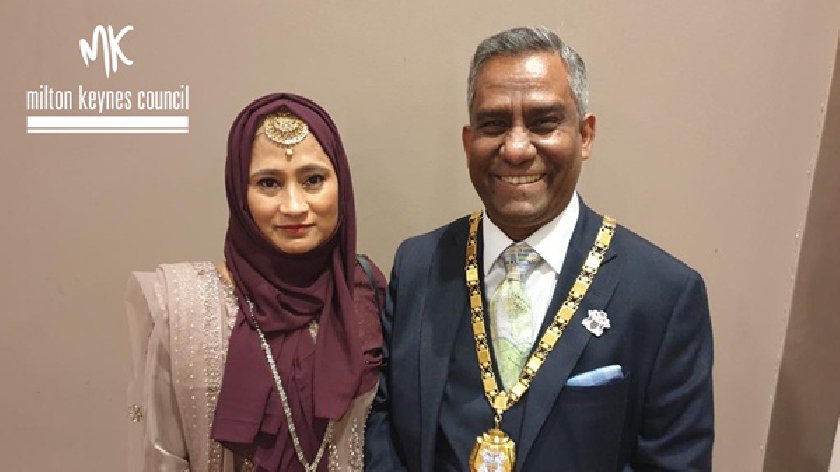 Cllr Mohammed Khan is the new Mayor of Milton Keynes for 2021-22 and the first of Bangladeshi heritage.

Mayor Khan, who was born in the city of Sylhet in Bangladesh and moved to Bletchley with his parents in 1982, was first elected to Milton Keynes Council in 2013.

He was formally sworn into office at the socially distanced and live streamed Annual General Meeting of MK Council at Stadium MK on Wednesday 17 May, succeeding outgoing Mayor Andrew Geary.

“I’ve been fortunate enough to witness the progression and successes of Milton Keynes over the last 50 years, and its development as a forward-thinking inclusive place to live, work and visit.

“It’ll be an honour to represent that and celebrate the diverse communities that make up our great city.”

A keen fan of football and cricket, Mayor Khan will be joined by his wife Lilipa Aktar as Mayoress for the forthcoming year. The pair married in 2001 and have five children working and growing up in Milton Keynes.

The Mayor’s two chosen charities for 2021/22 are Milton Keynes Islamic Arts, Heritage and Culture, and the British Heart Foundation.

In the past few months, Mayor Khan has been incredibly vocal about encouraging BAME communities to get the COVID-19 vaccine.

There has been a significantly low uptake among these groups due to misinformation being spread about the vaccine's origin.

Mayor Khan has had the vaccine himself and believes that everybody needs to do "all we can" to stop the spread of the virus.