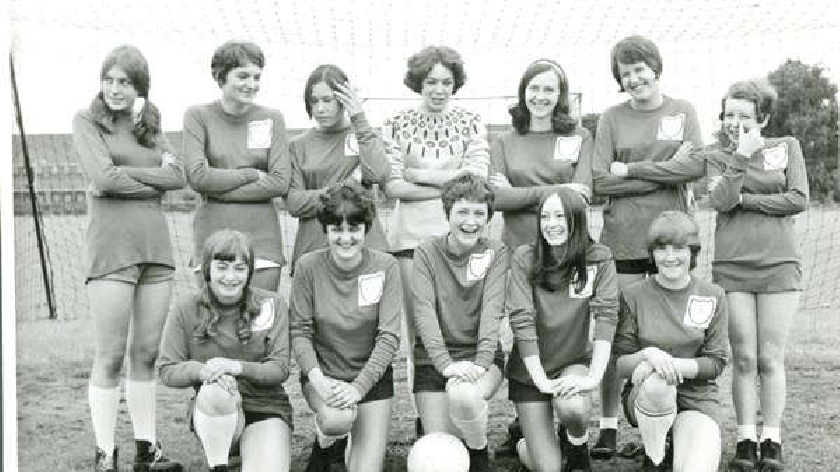 Fodens Ladies FC in the 1960s. From the 1960s the team established itself as one of the pioneers of the women’s game. Photo from the National Football Museum.

The 2022 UEFA Women's Euro, which takes place in June and July, is shaping up to be one of the biggest events in women's footballing history as 16 nations compete to be crowned European champions.

Much like the UEFA 2020 Euro, the 2021 Women's Euro was delayed for a year due to the currently ongoing COVID-19 pandemic.

Milton Keynes as one of the nine UEFA Women’s EURO 2022 host cities is taking part in a National Lottery funded project to uncover the hidden history of women’s football in a summer of celebration of the game, its players and communities.

In partnership with The FA, Milton Keynes Council and its local partners have joined a number of other organisations across England for the project which has been awarded £500,000 by The National Lottery Heritage Fund.

A spokesperson for Milton Keynes Council says: "It’s an important year for women’s football, as England hosts the UEFA Women’s EURO and the Lionesses mark their 50th anniversary.

"However, the history of the game goes back a lot further than many might think.  This year also marks 141 years since women’s football was first played professionally."

The National Lottery funded project aims to challenge the common perception of women’s football being ‘new’ and change the nation’s understanding of ‘the English game’.

For the very first time, information about every England player, captain, goal scorer and match score since 1972 will be researched, recorded and shared alongside the information that already exists about men’s football.

Hosted on England Football’s website the record will continue to be updated, ensuring future female players are part of the nation’s footballing story.

The project will particularly explore the role of the LGBTQ+ community.

Milton Keynes Council and its partners have pulled together an inspiring local programme which, thanks to funding from The National Lottery Heritage Fund made possible by National Lottery Players, will engage new and diverse audiences across the borough in the run up to and during the UEFA Women’s EURO 2022.

Cllr Jane Carr, Cabinet Member at MK Council responsible for Sport said: “We’re proud to be playing our part in delivering a record-breaking tournament for women’s football this summer.

"Through the UEFA Women’s EURO 2022 Heritage Programme and funding from The National Lottery Heritage Fund, we’re delivering an exciting programme of cultural events which we can’t wait to see come to life.  It will support post-pandemic recovery; deliver inward investment; boost the visitor economy; reach new audiences and rebuild confidence to attend and participate in events.”

Stadium MK will host four games, one of which being the semi-final. The group stages taking place in Milton Keynes will be on Friday 8th July, Tuesday 12th July, and Saturday 16th July.

The highly-anticipated semi-final will happen on Wednesday 27th July.