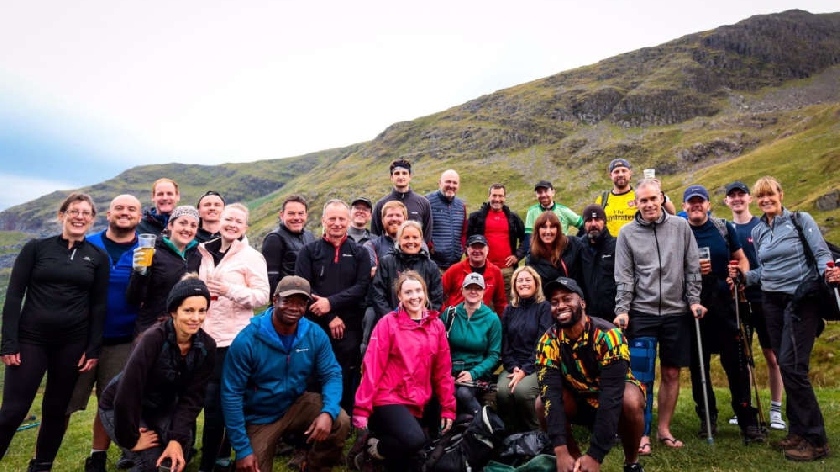 A brave team of Grand Union colleagues have scaled 24 peaks, raising more than £40,000 for charity.

The Milton Keynes team trekked over 34 miles with 12,234ft of ascent in total.

Fellow budding fundraisers from other organisations including Longhurst Group, the Chartered Institute of Housing and Mosscare St Vincent’s housing joined the team in their epic hike.

The amazing amount of money raised will go towards MIND charity and Harry’s Pals.

Team member Dave Lakin, Director of Development & Commercial at Grand Union, said: “We were all very excited but also nervous about the 24 peaks. For all of us, it was the most gruelling hike we’d ever done.

“The donations spurred us on during the trek, especially during very wet and dismal conditions. Having planned the fundraiser for many months, it was great to finish it, with smiles on our faces.”

Aileen Evans, Group Chief Executive at Grand Union Housing Group, said: “I’m so proud of what our colleagues have achieved. Not only did they complete their brave fundraiser, they trained long and hard to make sure they were in good fitness ahead of the challenge.

“Raising more than £40,000 for both MIND and Harry’s Pals was incredible and I am so grateful for everyone who has donated. I’ve been very open about my family’s experience with poor mental health and I’m passionate about working with MIND to create an open culture about mental health in the workplace.”

Alongside its commitments to MIND, Grand Union recently signed up to Harry’s Pledge – a campaign launched by Harry’s Pals, calling for social housing providers to do more to support carers.

You can still sponsor the team here.