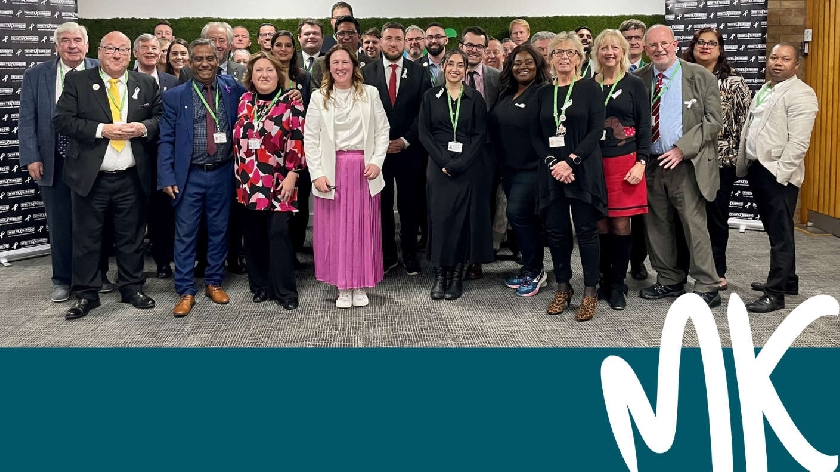 Milton Keynes City Council’s stand to end all men’s violence against women has led to it becoming White Ribbon Accredited ahead of White Ribbon Day this Friday (25 November).

At a ceremony last night, the City Council renewed its cross-party support for White Ribbon, a global campaign that encourages people, especially men and boys, to challenge behaviour and change the culture that leads to abuse and violence against women.

A White Ribbon action plan produced by the City Council includes updates to its workplace domestic and sexual abuse policies, guidance and training for colleagues, housing and support services for women and children who need to flee violence and abuse and a range of measures to improve safety on the streets and in schools for local women and girls.

The City Council is also establishing a network of male ‘ambassadors’ and female ‘champions’ among its officers and councillors, to promote the message and raise awareness of the issues.

On White Ribbon Day itself, the City Council’s Youth Cabinet (YCAB) will share a poem to advocate their support of the campaign during a candlelit vigil in Campbell Park.  Following this, events will take place across the city during ‘16 days of action’.

Cllr Emily Darlington, Cabinet Member for Adults, Housing and Healthy Communities, says, “Women and girls have the right to feel safe in our city. We all have stories from ourselves or our loved ones of being harassed, abused or even raped. This formal accreditation is a sign of the City Council's ongoing commitment to the White Ribbon campaign. But for women and girls to truly be safe, we need to come together and commit to challenge behaviour and attitudes of men and boys across our city.

"Already organisations and individuals are signing up to be ambassadors and champions and I am asking local organisations of all sizes to join us and lend their support to these issues. Together, we can become the first White Ribbon City and women and girls in MK can feel safe and supported by men and boys.”

Sue Burke, CEO at MK-Act Domestic Abuse Intervention Services, adds, “By witnessing what our inspirational clients go through and the aftermath of abuse, we understand the devastating impact of violence against women and girls. It is important to support those who have experienced violence and abuse; to raise awareness and ask people to make a stand so that less women and girls experience it.”

Earlier this year, MK City Council and partners through the Safer MK Partnership secured almost £750k of national funding towards a programme to make streets safer for women and girls.  The project will see upgrades to popular pedestrian routes in Central Milton Keynes, with additional CCTV and lighting in and around underpasses.

The City Council has also launched a new campaign #itstimetoactMK to challenge all forms of domestic abuse whilst signposting the local support available.  A series of bold messages highlight issues such as financial control and emotional abuse via online posts, short videos and printed materials.

Individuals can join over 37,000 others who have signed the White Ribbon UK pledge and get more information online at www.whiteribbon.org.uk