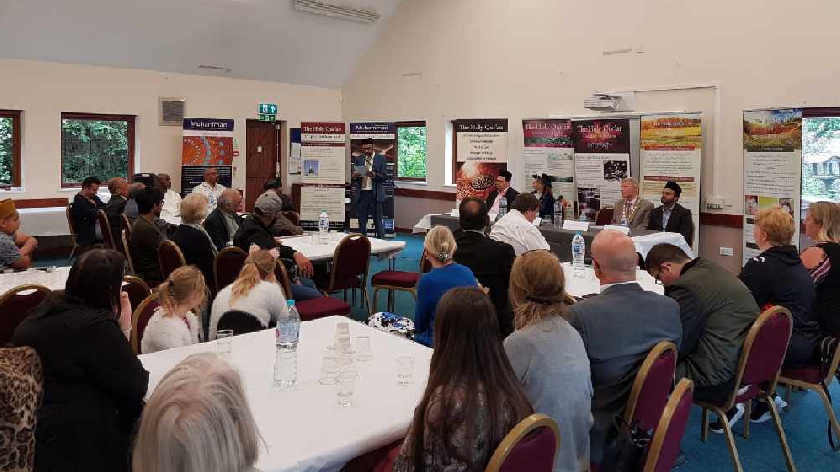 The attendance was honoured with the presence of High Sheriff of Buckinghamshire Julia Upton MBE, the representative of Her Majesty The Queen, along with the newly elected Mayor of Milton Keynes Councillor Sam Crooks. The event was attended by the people from various backgrounds including members from the council of faiths, school teachers, university professors, professionals and various charity representatives. 130 people attended the dinner.

Next speaker was the Regional Missionary, Imam Mujeeb Mirza, who explained the importance of fasting and the reason to celebrate Eid in the light of teachings of Holy Quran and other scriptures including Biblble. Imam’s speech was followed by the National Charity Walk promotion speech led by the coordinator Aamir Bhatti. Representatives from MK Dons also shared the details of the event, which is to be held in Milton Keynes on 30th of June 2019 at MKDons Stadium.

Then the Mayor of Milton Keynes Councillor, Sam Crooks, and the High Sheriff of Buckinghamshire, Julia Upton MBE, praised the efforts of the Ahmadiyya Muslim Association in their speeches respectively. They appreciated the efforts of Ahmadiyya Muslims Community in bringing the communities together through such events and gatherings. Later both dignitaries went on to meet and greet all the attendees and wished members Eid Mubarak. The formal session was ended by closing remarks from Regional President Muhammad Rafi-ud-Din. In the end Regional President lead the silent prayers which was joined by all communities.

In the final session, food was then served. All attendees were given a guest pack which included brief introduction of the Islam and the Ahmadiyya Muslim Community. The guest packs also included key addresses of the World wide Head of Ahmadiyya Muslim Community, His Holiness Mirza Masroor Ahmad. There were exhibitions setup around the halls which gathered the interest of attendees. The guests showed a keen interest in knowing more about Islam and the community and showed heartfelt desire to join on any future events. Below are some pictures showing highlights of the event.

The Ahmadiyya Muslim Community is a religious organisation, international in its scope. With its sincere desire for peace, the Ahmadiyya Muslim community has grown and is established in more than 200 countries with a following of over 200 million. It is internationally renowned for its services to humanity by providing disaster relief, medical facilities, energy and education worldwide.