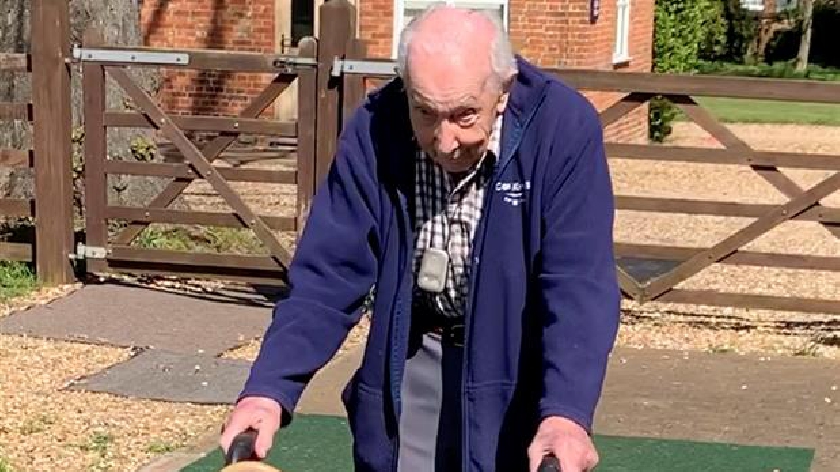 Tom Moore, from Marston Moretaine, will be walking 100 lengths of his 50-metre-long garden before his 100th birthday to raise money for the NHS.

Tom has decided to raise some money before his birthday, which is less than four weeks away, for our incredible national frontline and support health workers.

He will donate 100% of the funds raised to NHS Charities Together.

The NHS Charities Together is a collective experience representing, supporting and championing the work of the NHS’ official charities. NHS Charities give £1million a day to the NHS, providing vital funds to help the NHS do more and be better equipped.

Tom was born in April 1920 and was raised in Keighley, Yorkshire, but after many years in Kent, in 2007 he moved to Marston Moretaine, Bedfordshire with his daughter, son-in-law and two grandchildren and became the oldest but wisest advisory for their business, Maytrix Group.

Tom attended the Keighley Grammar School as a child and later went on to complete an apprenticeship as a Civil Engineer. He was then enlisted in 8 DWR (145 RAC) at the beginning of the war, and in 1940 was selected for Officer Training. After completion, Captain Tom Moore went on to be posted in the 9 DWR in India and served and fought on the Arakan and Burma. After all overseas duties were said and done, Tom returned to the United Kingdom to become an Instructor at The Armoured Fighting Vehicle School in Bovington.

You can get behind Tom and his birthday walk by donating here.