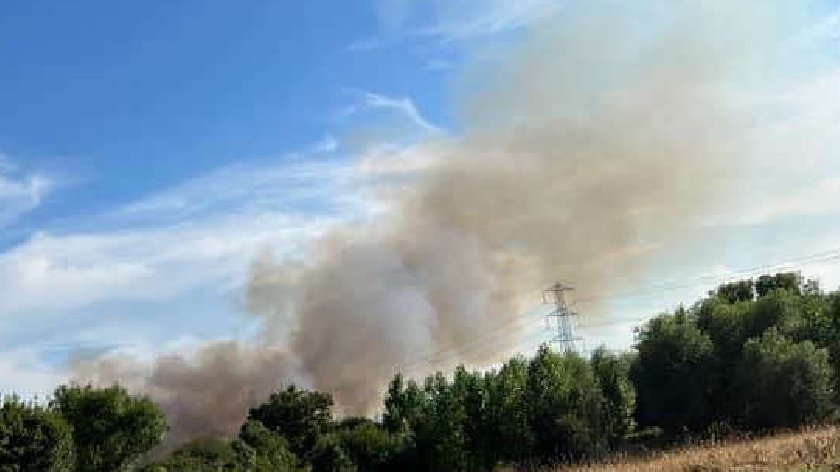 Buckinghamshire Fire and Rescue firefighters have attended 230 outdoor fires since August 1st, over 140 more than this month last year.

As the UK enters into another period of extreme heat, the Met Office has issued a Level 5 Exceptional Fire Severity Warning for parts of Buckinghamshire this weekend.

Community Safety and Safeguarding Manager, Jo Cook, said “Field fires have the potential to spread quickly and, because of their remote locations, can be physically demanding on firefighters who use beaters to help put them out.

“While it may seem like only grassland has been destroyed the harsh reality is that it often involves standing crops, the culmination of months of hard work for farmers. As well as the physical loss this also has a financial implication for the landowner and can impact on subsequent crop yields.”

With an exceptional fire severity warning in place, the risk of these fires spreading is at its highest level.

Jo added: “Some of these fires start accidentally as the moving parts on farm machinery get hot and ignite dust which has accumulated during the harvesting process. Sadly, however, human behavior has also played a part in a large number of the field fires and fires in the open that we have attended.”

The fire service that looks after Milton Keynes and Buckinghamshire also recently released figures stating that it has received calls to 68 bonfires since the 1st July.

Buckinghamshire Fire and Rescue are now urging residents to save their bonfires until the cooler weather.

"You only have to look out of the window to know how dry the grassland, verges, hedgerows and fields are following the unusually hot dry weather. Unfortunately, this means that there is a real risk of fire starting from human behaviour and impacting on property and others," A spokesperson for the fire service said.

"Milton Keynes has the benefit of numerous parks and green space, the prolonged high temperatures have led to this becoming tinder dry, with the resulting impact being that any fire has the potential to spread really quickly.

"Sadly, areas such as the Blue Lagoon nature reserve have been impacted recently by discarded rubbish either catching light accidentally or being deliberately set light to.

"Glass bottles left in vegetation can focus sunlight, prompting smouldering. Coals in disposable barbecues take a long time to cool down and should not be left to burn out."

In June, The Parks Trust banned BBQs from any of their sites, due to increasing public safety risks.

READ MORE: The Parks Trust bans BBQs from Milton Keynes parks due to increasing risks to public safety and environment

A Bucks Fire spokesperson said: "Whilst landowners like The Parks Trust proactively manage their land, short grass and hedgerows can still burn when cigarettes or glass bottles are dropped on them."

Emberton Country Park is also a picnic only park, with barbecues only prohibited on site only for those in the camping area.

"Since 1 July 2022, Buckinghamshire Fire and Rescue Service has been called to 68 bonfires at a time when there has been a number of large-scale incidents, including a major incident being declared due to the exceptionally high demand.

"We are therefore asking you to not have bonfires during times of extreme heat. Consider the potential impact of bonfires, barbecues and discarded rubbish starting a fire that may spread and damage the area you were enjoying."