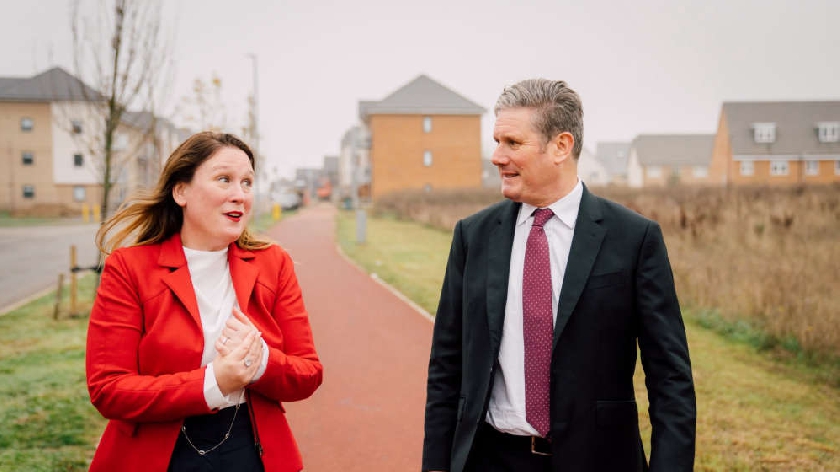 Keir Starmer and Rachel Reeves MP made a visit Milton Keynes yesterday (14/11), to talk to first time buyers ahead of the Autumn Statement.

Keir Starmer, Leader of the Labour Party and Rachel Reeves, Shadow Chancellor of the Exchequer, made a trip to Milton Keynes yesterday (Monday 14th November) to discuss home ownership.

The pair made a visit to the new Saxon Reach development to discuss housing with first time buyers and local Labour councillors ahead of the Autumn Statement on Thursday.

So good to welcome @Keir_Starmer and @RachelReevesMP to MK to talk about the struggles people have getting on the housing ladder during this economic crisis created in Westminster #loveMK @MKLabourParty pic.twitter.com/lTv8KGdxwG

"We need more space but we are at the point now where with inflation and prices and petrol and everything, we are actually going to have to downgrade," one resident told Keir Starmer.

Another told the Labour Leader he has to work three jobs to privately rent.

The Labour leader says he would give first time buyers priority on new properties.

"What I want to see on Thursday is a fairness test, there are fair ways of making money and oil and gas windfall tax would be one of them."

Like so many others, people in Milton Keynes are seeing their dreams of home ownership destroyed by the Tories' economic failure.

Working people deserve the security and pride that comes with owning your own home.

The Tories are taking this away.

Labour will give it back. pic.twitter.com/cYzwqiQJxf