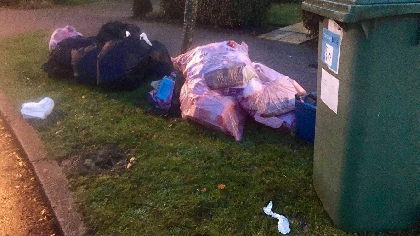 At the moment residents in MK have to buy their own black sacks to get rid of their non-recyclable rubbish, but this is thought to be one of the reasons that recycling rates in the city have flatlined.

And when people instead place things like nappies and crisp packets in the recycling sacks, it contaminates the waste. This leads to the council being fined around £700,000 each year by waste companies.

The council’s Cabinet member for public realm, Cllr Emily Darlington (Lab, Bletchley East) had already announced, in June, that she would be consulting on the issue.

Waste contracts run by the council come to an end in 2023, which gives the opportunity to create new ones, and set out what the public and the council wants.

But Cllr Kerrie Bradburn (Lib Dem, Broughton) in her maiden speech called for any decisions to understand the different challenges that estates face. She said a consultation exercise with the public in her own ward had backed a move to replace black sacks.

“We’ve been kicking the can down the road for 15 years. We’re in danger of making Brexit look speedy,” he said.

“We’re still using single-use plastic sacks when the world is telling us not to.”

In the light of the recent discovery of at least 50 pink council recycling sacks in the Malaysian jungle, Conservative leader, Cllr Alex Walker, proposed an amendment to change future waste contracts.

The Tories wanted to require contractors to appoint a “reputable independent auditor” to investigate the waste supply chain. They also called for the Cabinet to publish the terms of reference for the investigation they have ordered
into the supply chain.

Cllr Walker said the council did not understand its supply chain and had instead blamed residents for misusing the old pink sacks which a BBC documentary team found in Asia.

Replying to an earlier question, Cllr Emily Darlington (Lab, Bletchley East), said she and council officers still had confidence that the council’s contractors were not responsible for MK waste bags ending up in a rubbish tip on the other side of the world. A review is understood to be a few weeks away from producing its own conclusions.

The council’s Labour and Lib Dem members united to vote down the Conservative amendment. But then all sides of the chamber voted in favour of the substantive motion.

The actual consultation exercise will be launched following a Delegated Decision by Cllr Darlington at a date to be decided.