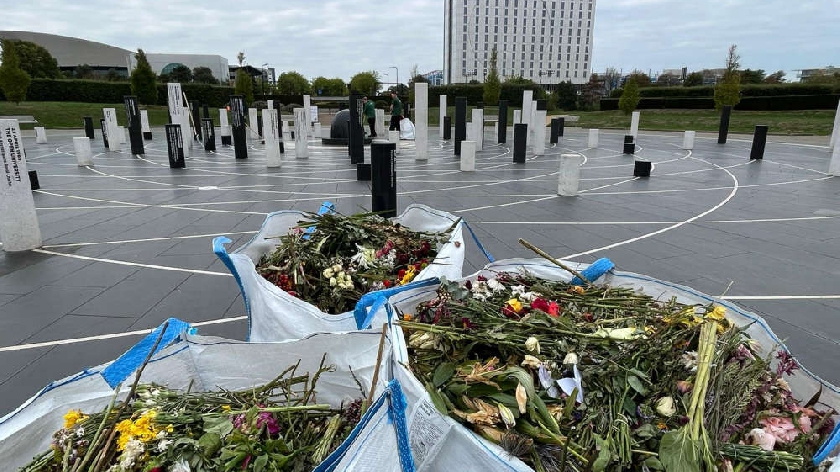 Local recruits to the newly-formed Parks Trust Cleansing Team have been removing the thousands of flowers placed at The Milton Keynes Rose in honour of Her late Majesty, Queen Elizabeth II.

Since her death was announced, floral tributes have been laid daily by local community groups, companies, dignitaries and residents.

The flowers were carefully gathered up today by Kelvin Brookbank, Parks Cleansing Officer, and members of his team Terry Tomlinson, Rowan Blake and Timmy English.

Over the coming days, the process of composting the petals and stems will begin and, when ready, the final compost will be used to feed plants, shrubs and trees across local parkland.

Among the trees that will benefit from the very special compost will be those planted by The Parks Trust and others as part of the Queen’s Green Canopy.

Before the flowers were collected, The Parks Trust removed all written messages, photographs and drawings left by visitors. These are now being digitised and will be retained for posterity at Living Archive Milton Keynes.

Commenting on the team’s unique role in the nation’s commemorations, Kelvin Brookbank said, “It was a huge honour to have been given the task of collecting everyone’s floral tributes to the late Queen and we are proud to have been involved. It was only when we started to remove every single stem that the enormity of recent events sunk in. Every flower represented a thank you to Her late Majesty. It was a very moving task.”