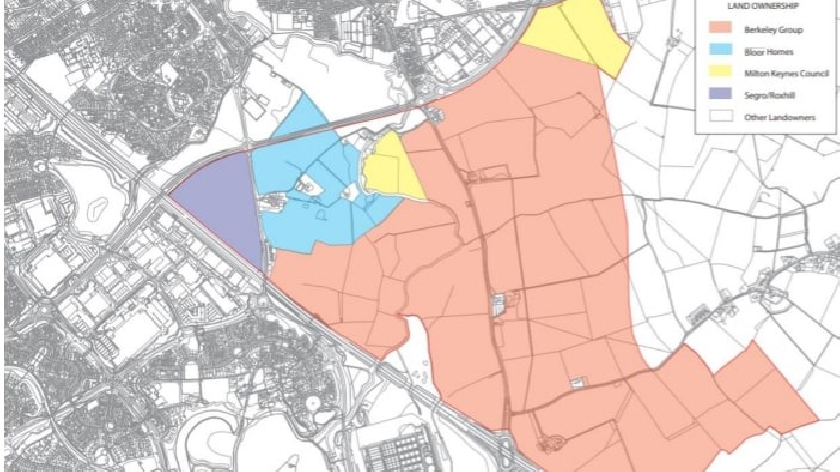 Developers have asked planners at Milton Keynes Council for their opinion on the potential environmental impacts of building up to 800 new homes on agricultural land south of Newport Pagnell.

The 42 hectares of land owned by Bloor Homes is a relatively small part of the Milton Keynes East development area on the other side of the M1 from most of the city and which is set to take 5,000.

Bedford based agent dlp planning has sent its own assessment of the impact of the development, which could also see a new primary school, local centre and green space.

The Bloor Homes slab of the agricultural land is bounded by Willen Road, Monks Way and the river Ouzel.

It’s also close to the Tickford Fields Farm area where a plan for up to 930 new homes is also being considered.

According to the agent, the main issues are the loss of lowland meadow habitat for wildlife and the loss of some archaeology.

“The effect of this on protected species, without mitigation, could include disruption to bat commuting and foraging route along the River Ouzel and grassland habitat which provides foraging area for barn owl and breeding habitat for ground nesting birds,” say the developer’s agent.

They are planning a series of measures to “negate the possible adverse effects and provide biodiversity net gain for the proposed development.”

These include the protection of “bat commuting” routes, minimising loss of grasslands and planting a new hedgerow.  They are also considering open space, including sports pitches.

“Where possible, trees and hedgerows within the development area would be retained and incorporated into the design, particularly the belt of trees running west-east through the middle of the development,” they add.

“A linear corridor running through the development would be kept free of development.”

They point out that there’s a possibility of transport problems but “these will not have a significant effect on the environmental once full occupation is reached.”

They will be assessing transport issues to see if any road safety matters need to be addressed.

At a meeting at MK Council on July 28 leader Pete Marland formally accepted a £94.6 million pot of Government money to pay for infrastructure at Milton Keynes East. It includes a bridge across the M1.

Cllr Marland (Lab, Wolverton) told objectors that a fight over the principle of building on the land had been lost when it was approved by the Government.

He appealed for objectors to join in the planning process and make the development better.

Lib Dem Cllr Sam Crooks (Broughton) made an impassioned speech over the need to provide homes for young people.

But the battle is unlikely to end soon, as at the same meeting Tory Cllr Keith McLean (Olney) said the village of Moulsoe was a “sacrifical lamb”.