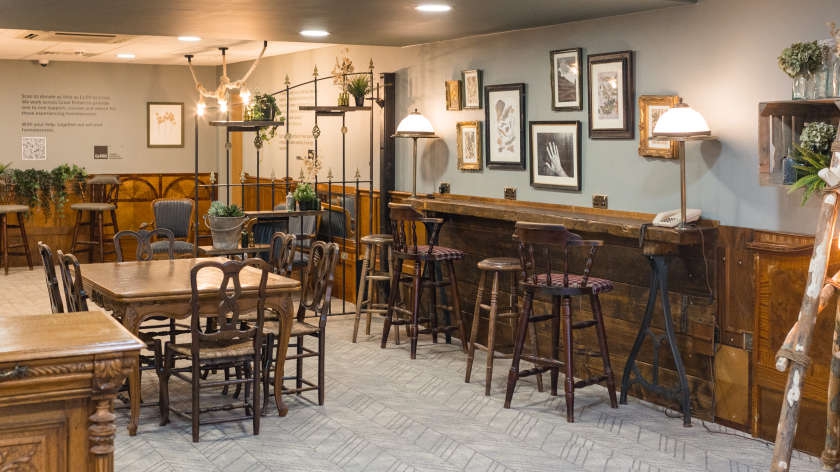 Independently owned country hotel, Horwood House, in Buckinghamshire has teamed up with national homeless charity Crisis, and upcycling company Recoup, to transform an unused, syndicate break-out space into a creative and crafted coffee lounge for delegates.

The Crisis Charity Coffee Lounge (120sqm) has been brought to life by a team of Crisis volunteers and members led by Recoup Founders, Tom Marsh and Ben Lunt.

The coffee lounge has been transformed to reflect the horticultural surroundings and history of the hotel, with reclaimed furniture carefully restored to its former glory – and in some cases repurposed – to create unique pieces such as wall panels made from antique French headboards, cast-iron garden gates and dried flowers pressed into picture frames.

Horwood House is known for its multiple meeting and event spaces and sees 4000 delegates passing through on average per month.

Working closely with Crisis and their coffee partner Volcano Coffee Works, the hotel will be continuing their support with the charity by purchasing coffee beans to fuel delegates in the lounge with 15% of all Volcano coffee purchases made by the hotel going straight to Crisis.

Delegates will also be encouraged to support the cause by scanning the QR donation codes on the tables in the lounge.

The hotel will be supporting further by donating 5% of revenue from all contracted conference and corporate event bookings taking place in January, February and March 2023.

Crisis work side by side with homeless people to help them rebuild their lives. From decades of experience, they know what’s needed to leave homelessness behind for good. Through education, training and support with housing, employment and health, offering one-to-one courses and advice for homeless people nationally, Crisis aim to end homelessness for good.