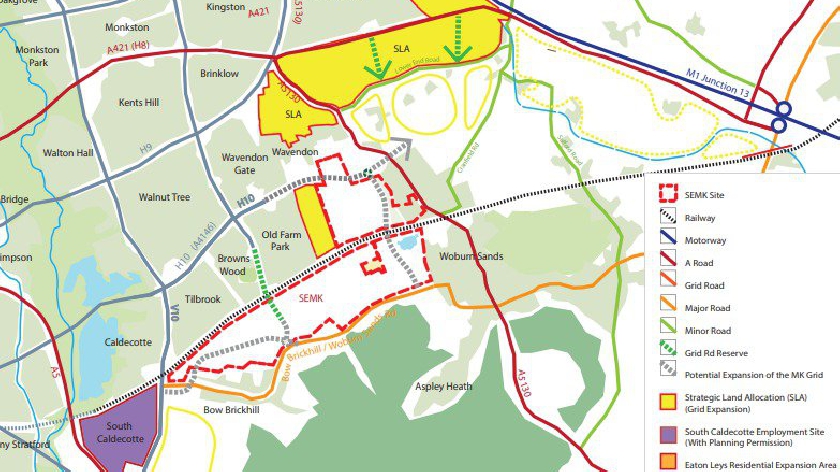 A parish council has responded to claims that it provided misleading information to residents over potential grid road extensions in the south east of Milton Keynes.

The 198-hectare South East MK site is bounded by Tilbrook, Browns Wood and Wavendon to the north, Woburn Sands to the east, and Bow Brickhill to the west.

“The information is not factual, is misrepresented, and has intentionally led people to believe that in the case of the Old Farm Park/ Browns Wood communities that there would be no grid road extensions planned to be built through their communities,” said the resident, who asked for his name to be kept secret.

The resident added that information sent to residents by Walton Community Council (WCC) has “misled residents in supporting an extension to the V11 grid road through a community which has been established for over 20 years.”

WCC’s position is that it supports grid road extensions, and that it encourages residents to help persuade developers to build them.

But in the west of the city, residents are up in arms about extensions to the V2 which got planning permission in 2007.

Cllr Adam Chapman-Ballard, the vice chairman of WCC said the parish’s response to MK Council was created by a resident-led working group.

“A V11 extension over the railway to future development was always planned. There is a reserved grid road corridor in place since Browns Wood and Old Farm Park were built.

“MK is built with grid roads between estates. We’re not sure how Browns Wood and Old Farm Park are different to anywhere else in MK.”

The area is earmarked for development in Plan:MK, which was approved by the government and the council in 2019.

The entire site could take around 3,000 homes, seven gypsy and traveller pitches, and a range of social and green infrastructure provision.

A landowner, called O&H Q7 is already working up proposals for 1,450 homes which also safeguards land for the H10 extension.

WCC’s position is based on development going ahead and they are “encouraging a non-NIMBY response from residents to shape SEMK in a sensible and sustainable way, rather than having to live with whatever a developer decides we should have – people before profit.”

Cllr Chapman-Ballard added that: “In summary, our materials and approach have been open, resident-led and not misleading.

“We’re striving to strike a balanced approach to the SEMK development that works for all residents in the Walton Community Council area.

“Anyone is always welcome to join our regular meetings, forums or working groups and shape our approach.”

Milton Keynes Council, which is consulting on a framework to guide development, said the consultation deadline would not be extended.