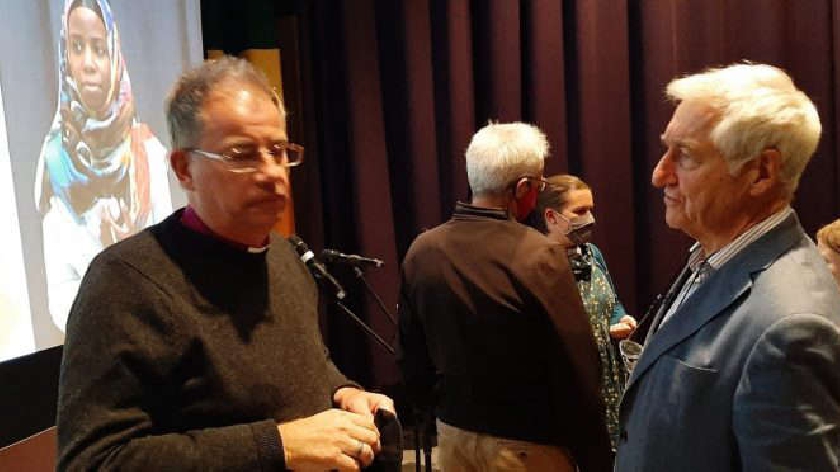 On the evening of Thursday 2nd September at MK Gallery, civil society organised an event called “Together in the Climate Crisis”, bringing together civil society, local government and business leaders.

It was held in honour of a visit from the Bishop of Oxford, Steven Croft.  The Bishop is a member of the House of Lords Climate and Environment Committee, and the focus of the event was building a joint-up approach to the Climate Crisis in Milton Keynes.

Moving testimony about the impact of climate change was provided by 19 year old Lauren Jeffrey from the Lakes Estate Renewal Forum.  She told the room about her initial response when hearing about the climate crisis at the age of 16:

“I feared for my life, and the lives of the people I loved. I started questioning all of my future plans.  In my head, they were all pointless.  I was in despair…But I decided that I wanted to be part of the solution, and that’s why I’m here.  Hopefully, this evening will be a good opportunity for us to come together around a shared goal of making Milton Keynes a climate role model for the rest of the UK.”

The room also heard from Alex Chapman, from Christ the Cornerstone Church and the New Economics Foundation, who spoke about his work for a think tank studying at first hand the impacts of climate change on coastal communities around the world, and the increasing number of climate refugees.  He spoke about his visit to sugar cane farmers in the Soc Trang province of Vietnam in 2013:

“My team’s job was to interview farmers about their crops and how much produce they had grown.  The tonnage of crop that year, from a village of hundreds of farmers, was zero. The creep of salt water into the soil had killed the sugar cane. Many in the village were packing up, and they were leaving. This is the story for tens of millions of farmers around the globe.”

It was also a night for discussing solutions.

Rob Paton from MK Quaker Meeting explained the idea of Carbon Fee & Dividend and how it is being adopted in Canada.  He explained the model, saying:

“Carbon fees are levied on fossil fuels at source but used only to fund a climate dividend that is shared out equally among adult citizens.  In this way what would be highly regressive as a tax, becomes a redistributive transfer. The less well-off come out ahead. This stimulates demand for the emerging technologies and investment in them – which brings down their price, further easing the great carbon de-tox.”

There were also talks from local business leaders.  Satheesh Krishnamurthy from the OU reported on some of the innovative solutions coming out of laboratories and universities.  Jo Lewington, Head of sustainability at Network Rail, described the huge programme of work both to reduce carbon emissions and to make the transport system more resilient.  And Clive Faine from Abbeygate Developments described how his industry had woken up to the seriousness of the situation and the steps it was now taking to put things right.

Jenny Wilson-Marklew, the cabinet member for Climate and Sustainability at MK Council, also attended. She offered a very moving speech, and said:

“In 2017 we committed to carbon neutral by 2030 and we are very committed to it, but we are not doing enough.”

Milton Keynes Council recently voted unanimously, across all parties, in support of the radical new approach to carbon reduction - Carbon Fee & Dividend.  The motion was presented by Jenny Wilson-Marklew, with speeches in support from Rob Paton, Rick Mutwarasibo and Catherine Butt, all from Citizens:MK.

Citizens:MK is an alliance of civil society institutions across Milton Keynes, focused on working together for social justice and the common good.  Their ask of the Bishop was for him to learn more about Carbon Fee and Dividend, and then meet with Citizens campaigners in the near future to discuss whether and how he might help promote it nationally.  He agreed, and gave a powerful speech, saying:

“We are doing scrutiny enquiries on COP15 and COP26 in the short term before looking at the long term enquiry on climate change and biodiversity.  The world has already lost, climate change is happening.  Every fraction of a degree of temperature change is worth fighting against.  The responsibility must be shared across all generations.”

You can find out more about Citizens:MK via their website here.