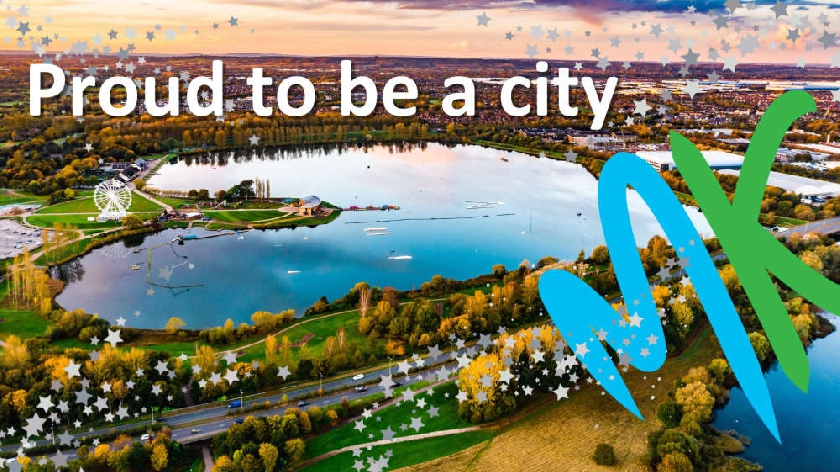 Milton Keynes can FINALLY be called a city after over 20 years of trying to gain the title.

The successful bid comes after three previous applications over the last 22 years. In 2000, an application was submitted for the millennium - then again in 2002 for the Golden Jubilee, and 2012 for the Diamond Jubilee.

38 towns in total applied for the civic honour, which is being crowned to several applicants as part of the Queen’s Platinum Jubilee. Back in December of last year, Milton Keynes sent its bid in typical MK fashion- by Starship robot.

Eight places won the royal honour this year ahead of the Jubilee weekend, the highest number of awards in a single competition:

As part of the application, Milton Keynes Council bought together more than 50 knowledgeable people and organisations to help develop the bid, which was then received by The Queen and her senior advisors.

The push for MK to be crowned a city received a wealth of public support from residents, with hundreds submitting photographs of their favourite local places and using social media to shout about how ‘MK was built to be a city’.

Over the years, there has been many debates regarding Milton Keynes’ official title, with some refusing to call it anything other than a city - despite the several failures before now.

Milton Keynes’ 2022 bid included a long list of compelling reasons as to why it deserved city status, including reasons such as its rich heritage (despite what people say), its city centre (which has always been called that – even when we were ‘just a town’), diverse places for worship, modern amenities, green spaces, innovative thinkers, and so much more.

It also stated that by any objective measure, ‘Milton Keynes already feels like a city’.

The formal introduction to the application read: ‘Our diverse population of nearly 300,000 people is noted for their willingness to serve and volunteer. We are a home of innovation, teaching the world’s cities how to be sustainable.

‘Our green space is unrivalled, a ‘city in a forest’ bringing joy and health. Where other cities build their cathedrals from stone, ours is grown from trees. More than this, we are a mosaic of communities united by a love of where we live.

‘The award of city status would be a recognition of our commitment and an inspiration for further cooperation.

‘We humbly submit this application to Her Majesty The Queen in celebration of Her Platinum Jubilee and request that the honour of city status be granted to Milton Keynes.’

The government says that winning city status can provide a boost to local communities and open up new opportunities for people who live there. Previous winners Perth and Preston are examples of where the local economies benefited from their improved national and global standing.

Culture Secretary Nadine Dorries said: "City Status is a huge accolade and I congratulate our eight brilliant winners. This competition showcases the best of Britain and the Overseas Territories and will act as a lasting legacy of Her Majesty The Queen's Platinum Jubilee."