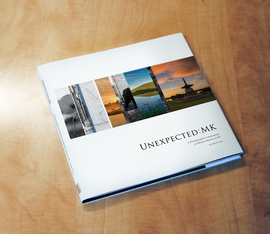 A new photographic celebration of Milton Keynes book has been published.

Created by Gill Prince, the purpose of the book is to demonstrate to readers how beautiful and unique Milton Keynes is at 50 - through a mix of 50 urban, architectural and landscape images, each of which showcases a different aspect of the city. These were primarily been taken between Autumn 2015 and early Autumn 2016, to cover a full range of seasons.

The book is due out in early December and will be available to buy from the Visitor Information Centre in the centre:mk. You can find out more via Gill Prince's website.

Here's what she has to say about the new photography book...

As a Milton Keynes resident since 1992 (coincidentally when MK was 25) I have always been a huge advocate of the town, and have brought up my family here during the last 25 years. My involvement in this 50th anniversary initiative is particularly relevant as I too will be 50 in 2017, though I'm not sure I should admit that!

The idea for this photography book came about over lunch with world-renowned landscape photographer Charlie Waite, who I am pleased to know as both a colleague and mentor. Having discussed the idea at length with Charlie, I then approached the MK50 team at Milton Keynes council, who were very helpful in supporting me during the early stages of the project's development.

The book features a number of extracts from the iconic Milton Keynes street maps which have been produced over the years - both new and old - made possible thanks to MK Council, Ordnance Survey, Heron Maps and the MK City Discovery Centre.

The new maps show where each image was taken, while the old extracts also show an element of the map which indicates a 'future development' - for example a dotted line where a lake would be created, or a designated location for an iconic building - alongside an image of that lake or building as it is today.

I had originally intended to call the book 'Vision to Reality' but subsequently discovered as part of my research that a book on Milton Keynes called 'Image and Reality' by Terence Bendixson and John Platt, which was published in 1992, already exists. We were in the process of thinking about a new name for the book when I was approached by Destination MK about the possibility of calling it 'Unexpected:MK' to link in with their ongoing advertising campaign for Milton Keynes - which also included some of my images. I instantly knew that this was the right name for the book, as even though I have lived here for 25 years, in the process of taking images for the book over the last year I have come across so many places that I didn't even know existed!

We are initially be printing 500 copies of the book, which is a high quality, professionally designed and printed 10” x 10” art book with a separate dust jacket. To make this project possible, we have gained sponsorship from a range of Milton Keynes based business, as detailed above, each of whom will receive a proportion of the books in relation to the sponsorship amount. The books can then be used as corporate gifts throughout the year, and will be delivered in time for Christmas 2016.