The Play That Goes Wrong

The Play That Goes Wrong

Nancy Stevens, MKFM’s Arts Correspondent had more than her funny bone tickled at Mischief Theatre's The Play That Goes Wrong which chaotically arrives at Milton Keynes Theatre, and from the moment the curtain does not go up, the stage is already set – and things go horribly wrong. A stage hand, Trevor (Graeme Rooney) is on stage with the Stage Manager, Annie Twilloil (Katie Bernstein) lamenting the loss of his Duran Duran CD while frantically trying to rectify the technical issues that should have been resolved before curtain-up. In fact, should have been rectified six weeks earlier in tech rehearsal...

The Cornley Polytechnic Drama Society present Murder at Haversham Manor and each character is a caricature of themselves.

This production was a like murder mystery on acid, and the chaos that ensues makes for constant hilarity, as props are not where they should be, lines are forgotten, repeated, or delivered in the wrong order; corpses end up ‘corpsing’, and the set literally falls down around their ears, to the point of being dangerous. The leading lady is replaced by the SM, as she had been knocked out and thrown unceremoniously out of a window.

The standout actor is cricket-sweater-clad Max, whose overacting, hamming up and constant vying for attention from the audience had us in stitches, as did Trevor, the deadpan Scots stagehand who bungled the lighting and sound.

I have been in some truly terrible am-dram productions in my time, and have to take responsibility for occasionally missing my cue, forgetting my lines and corpsing when I really should have been playing dead, and  having to deal with moving scenery - but making it look this bad, really is an art form which even I haven’t perfected!

The sheer brilliance of this play within a play is the ‘show must go on’ attitude of the cast. You are forced to suspend belief at the sheer idiocy of the shambles of this play; you are willing them to remember their lines, but also hoping that another disaster will prevail, thus providing yet more belly laughs. The sheer physicality of some of the downright dangerous stunts was all down to split-second timing.

Even the programme keeps in character with the inane biographies of the cast and some of the – erm - how I shall say this - inadequately cast shows such as Snow White and The Tall Broad Gentlemen, James and the Peach, Two Sisters and Cat.

The audience was in paroxysms of laughter almost throughout, and one of the gentlemen of the press next to me was in danger of suffering a coronary.

I cannot wait to see Mischief Theatre’s other offerings of hilarity in the form of Peter Pan Goes Wrong and The Comedy about a Bank Robbery.

The Play That Goes Wrong is on at Milton Keynes Theatre till 18th  March. 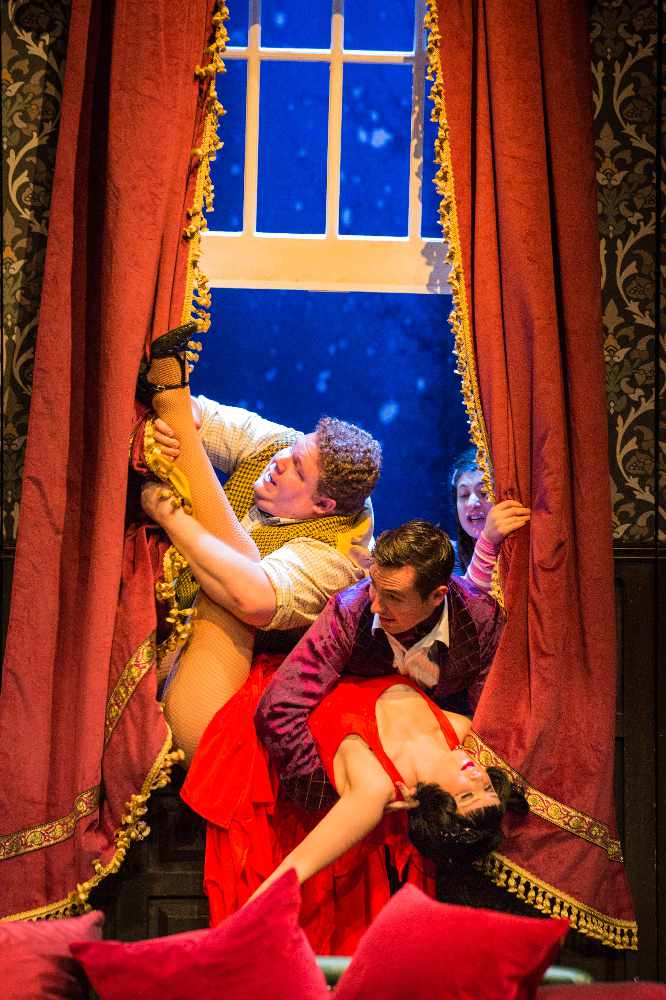