The theatrical pedigree of The National and Bristol Old Vic has produced one of the most astonishing pieces of theatre I have seen in all my theatre-going years.

I cannot profess to be a fan of the classics, and when I saw the stage set in contemporary style, my heart sank.  I am an unashamed fan of musical theatre, but know that I need to broaden my cultural horizons. However, any preconceived ideas dissipated within the first five minutes, and I was treated for the next three hours to a theatrical masterpiece. 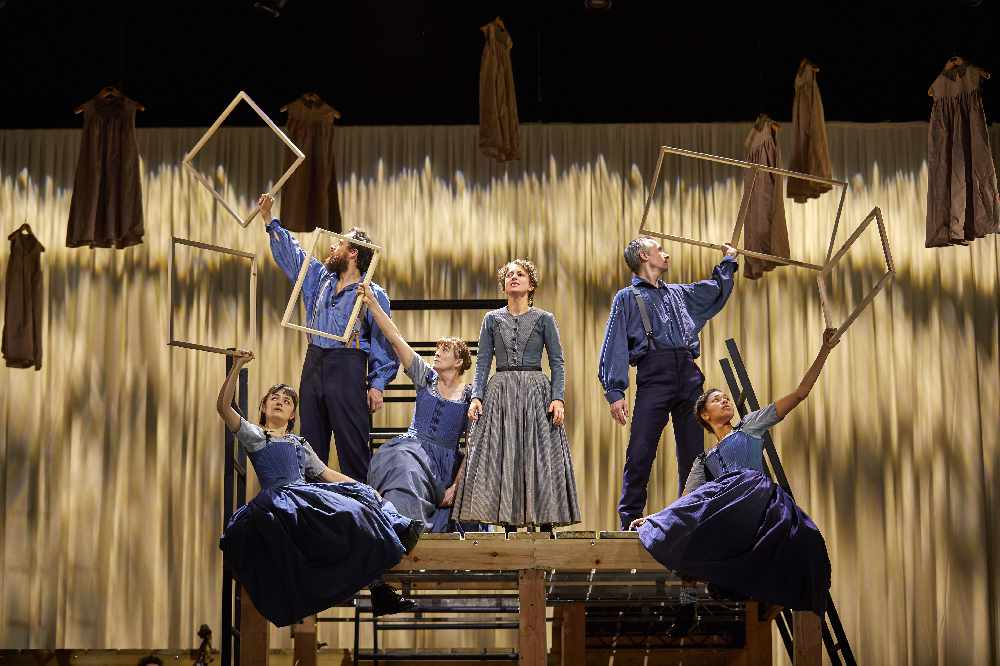 The story, partly autobiographical, written in 1847 by Charlotte Bronte under a pseudonym, reflects her own unhappy life.

The story here begins with Jane Eyre’s birth. Jane, played by Nadia Clifford has a childlike demeanour but demonstrates an early feistiness and a refusal to conform, which does not endear her to her aunt, Mrs Rook. Clifford is simply superb in this role, utterly believable as Jane, passionate, an early feminist who understands from an early age that in order to survive she needs to be nurtured - not just physically - but emotionally, spiritually and intellectually. Director Sally Cookson sees Jane develop from a helpless child into a freethinking, independent adult.  Cookson's direction is flawless, and this is the second production I have seen of hers this year, the first being La Strada. Her thought process behind the contemporary setting worked on every level, as there was not the distraction of period costumes and sets.

Some of the characters assumed several roles and moved seamlessly between them. A particular favourite was Paul Mundell as Mr Brocklehurst/Mason and Pilot the dog. He was utterly convincing as some sort of lurcher or high-energy dog, panting and with a constantly wagging tail.

The omnipresent Bertha Mason is played by Melanie Marshall who has the most magnificent operatic voice. (When checking her theatrical credits, it was no surprise to find she had played Carmen in Carmen Jones, and Bess in Porgy and Bess.)

Tim Delap played the Byronic hero to perfection, a brooding and troubled Mr Rochester, a tormented and tortured soul who is hiding a very dark secret.

I have yet to see such a tightly knit connected cast. They moved effortlessly between scenes, roles and lines - it was as if they had been performing together for years. Hannah Bristow played five roles: the tragic Helen Burns/Adele – Mr Rochester’s spoilt ward; Diana Rivers; Grace Poole and Abbot. The musicians were an integral part of the show, unobtrusive, yet vital, the mournful sound of the accordion or the gentle twanging of the guitar conveying the emotion.

Jane’s story is not a happy one. As an orphan, aged ten, she has an utterly wretched life, is unloved, and sent to an institution for poor and orphaned girls. Eventually she leaves to become a governess in the Rochester household and longs to impart as much of her knowledge as possible. Her thirst for knowledge threatens her very being, as she is incapable of accepting that women are merely there for decorative purposes, to learn to cross-stitch and to dance, and she fights this with every fibre of her being.   She and Edward Rochester form a friendship. He tries to make Jane jealous by saying he will marry Blanche Ingram (but does not intend to do so). Jane, ever vocal, admits she loves him, and he asks for her hand in marriage.

However, throughout, the mysterious Bertha Mason’s presence is keenly felt, but Jane does not know what it signifies. Strange things happen.

Jane rescues Rochester from a fire that, unbeknownst to Jane, is caused by Bertha his insane wife who lives in the attic. Then Jane’s wedding veil is cut in two. There are unaccounted-for whisperings in the house. As the two are about to be married, Mr Mason’s (Bertha’s brother and Mr Rochester’s friend) solicitor announces that Bertha is still alive. Jane is totally grief-stricken and, despite Rochester’s protestations that they can cohabit, Jane’s strong Christian and feminist principles will not allow this, and she flees. She is utterly destitute and falls ill, and is rescued by St John (an excellent Evelyn Miller) who also played Blanche Ingram and Bessie.  All three characters are so different, one is unaware they are played by the same person.  St John, a missionary, wants her to go with him to India as his wife, but she refuses as she still loves Mr Rochester. She is summoned to Mr Rochester’s home, only to find him blinded by another fire - again caused by Bertha who has committed suicide.  They are finally married, and the play ends, just as it began, with the birth of a baby girl.

This play is for anyone and everyone, with a valuable message - it highlights the importance of the arts and literacy in our schools. It is such a stirring story that I have now pledged to read the classics, as I have missed out on some of the most important literary gems in history.

I cannot recommend Jane Eyre highly enough. I rarely write a review this long, but I have to extol the virtues of this phenomenal piece of theatre

Jane Eyre is on at Milton Keynes Theatre until 15 July.