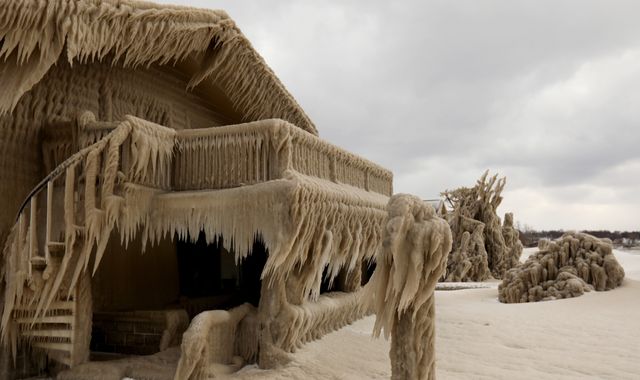 Lakeside homes in the US have been covered in three feet of ice after two days of gale-force winds.

Residents in Hamburg, New York, woke up to find their homes covered in icicles over the weekend.

Photographs from the town show the properties, which sit yards from Lake Erie, and nearby trees completely encased in ice - which locals have described as "frightening".

Ed Mis, who has lived in the town for eight years, told CNN his neighbours were concerned about how the ice would affect the structure of their homes once it starts melting.

"It looks fake, it looks unreal," he said. "It's dark on the inside of my house. It can be a little eerie, a little frightening."

"We're worried about the integrity, of structure failure when it starts to melt, because of the weight on the roof," he added.

"It's a beautiful sight, but I don't want to live through it again."

The giant icicles were then created when the strong winds blew the water from the lake towards the homes, which then froze.

"The strong winds and high waves were responsible for the significant ice accretion on the homes of Hoover Beach."

Hamburg's emergency services manager said the ice must thaw before teams can assess the full extent of the damage to homes.

Plans for a break wall and other protective measures are said to have been lodged by town officials.