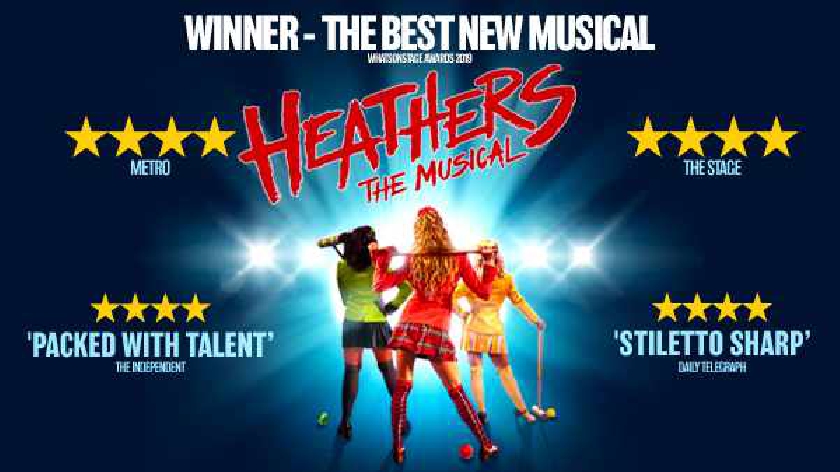 Charlotte from the news team was so excited to return to MK Theatre last night to watch Heathers The Musical and here is her review...

I was super excited to see Heathers The Musical, I had heard the popular soundtrack so many times but never actually had the opportunity to watch it live.

Heathers puts a dark twist on your typical high school drama. The plot sees main girl Veronica Sawyer do everything she can to be part of the popular 'it-girl' clique.

Along the way, the up beat musical covers dark topics such as suicide, murder, sexual assault and eating disorders.

As an audience, we follow the story from Veronica's perspective as she tries to win over the 'Heathers'; Heather Chandler, Heather Duke and Heather McNamara. In a bid to get in with the Heathers, Veronica follows suit and bullies her best friend Martha. New boy JD also wins over Veronicas heart, but all is not as it seems and the musical turns dark very quickly.

Rebecca Wickes (Veronica), opens the show with her voice. Filled with passion and soul, I was instantly blown away. As somebody who didn't know the ins and outs of the characters, Rebecca's portrayal of Veronica was exactly how it needed to be. The personality of Veronica came across so well that you actually felt sorry for her the whole way through, despite making mistakes and extremely wrong choices.

The Heathers were your typical mean girl squad, just like in all the high school movies. Heather Chandler, the 'main Heather' was played by Maddison Firth. Maddison was so believable that she instantly became a villian. However, as the show went on, she slowly turned into one of my favourites.

And then there was Martha Dunnstock. You would never believe that playing Martha in Heathers marks Mhairi Angus' professional theatre debut!  As the innocent, bullied, ex-best friend of Victoria, you couldn't not feel bad for this character. And then she started singing, wow! I'd be surprised if someone said they didn't feel like crying during her solo performance. Mhairi captured the character so well and her voice was amazing.

Every character was a typical high school personality, viewers would definitely be able to relate to at least one of them. The dark topics are also presented in such a way that it doesn't darken the brightness of the musical. However, the message that we got from the show really sat with me as I drove home.

If you like dark humour, unexpected twists and a good soundtrack, Heathers The Musical is 100% worth the watch.

Heathers The Musical is at Milton Keynes Theatre until Saturday 20th November, you can find out more here.