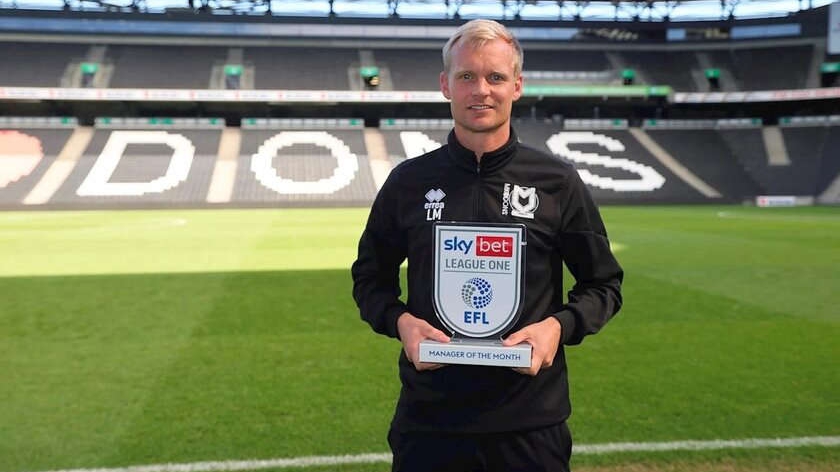 Milton Keynes Dons head coach Liam Manning has been deservedly rewarded for his side's impressive September, being named League One Manager of the Month.

The Dons boss led his side to an unbeaten league run of five matches during September, picking up three wins and two draws to claim an impressive 11 points from a possible 15.

Victories over Portsmouth (1-0), Wycombe Wanderers (1-0) and Gillingham (4-1) helped the Dons climb into the promotion picture in League during Manning's first full month in charge of the club.

His efforts saw him nominated alongside managers also in charge of high-flying clubs, Lee Johnson of Sunderland, Ryan Lowe of Plymouth Argyle and Leam Richardson of Wigan Athletic - all three clubs sitting in the top three spots of the league at present.

Even prior to being named winner of the award, Manning was firm in his grounded view of the situation and was keen to highlight the hard work from everyone in his backroom staff, and the players at his disposal.

In receiving the award, Manning remained the same, saying: "It’s an honour and a privilege to win this award but it’s important for me to highlight that this is a collective effort. This award is for everybody at MK Dons."

"Our form and success in September was a result of everybody’s hard work – the support staff who have worked tirelessly to prepare the players to go out and perform and, ultimately, the players themselves for producing performances on a matchday."

He added: "It’s been a really good start to the season for us but it’s a long season - we have to keep pushing and fighting to sustain our level of performance and continue producing results for the Football Club."

Scott Twine, meanwhile, who had been nominated for Player of the Month after netting four goals and providing an assist, missed out on the award to Cole Stockton of Morecambe.