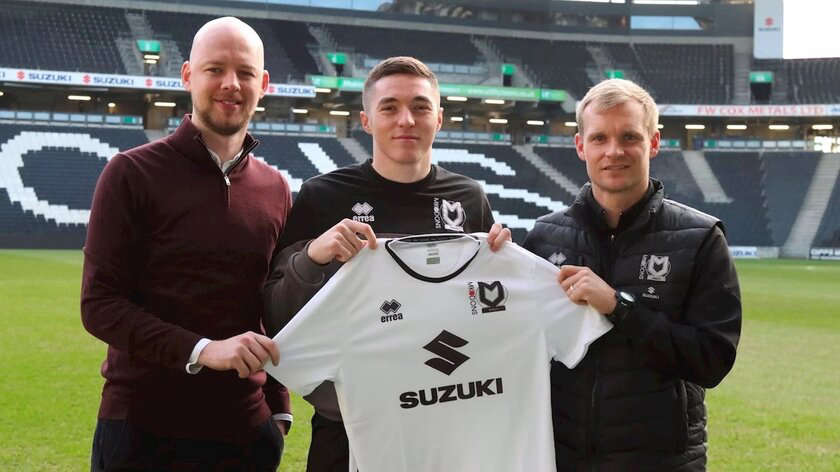 Milton Keynes Dons have today announced the loan signing of midfielder Conor Coventry as well as the departure of wing back Peter Kioso.

The 21-year-old Republic of Ireland Under-21 international joins the Dons after midfielder Ethan Robson was recalled by Blackpool yesterday, providing Liam Manning's side with some much-needed depth - with David Kasumu also currently sidelined with injury.

Coventry arrives at Stadium MK until the end of the season, having spent the first half of the campaign with Championship side Peterborough United, making 12 league appearances, and reunites with Manning, with whom he worked previously at parent club West Ham United.

Speaking of his arrival, Coventry commented: "I’m delighted to be here. This is a Club moving in a really good direction and hopefully I can help make a positive impact towards that."

"I know how the team plays and it’s something that suits me. I am a player who will always give my all and look to get on the ball, dictate play and help keep possession."

"I obviously know the manager from his time at West Ham. He is someone I trust and who really helped my development so I am looking forward to working with him again and hopefully I can repay his and the Club’s faith with my performances."

Sporting Director Liam Sweeting said: "Conor is a player we have followed for a long time, this being third time lucky in trying to sign him."

"He is an excellent fit for the role in terms of controlling possession and adding defensive responsibility. He had a fantastic pre-season with West Ham's first team and a move to the Championship followed."

"I’m looking forward to seeing Conor contribute towards our target in the second half of the season."

Sweeting added: "The last 24 hours are an example of our recruitment operations at their best."

"We weren't expecting Ethan to be recalled but the work our recruitment team do in preparing for every scenario, coupled with clarity from Liam Manning, means we are agile and ultimately can move quickly within the market."

Head Coach Liam Manning also commented: "Conor is somebody I know well from our time together at West Ham United."

"He is a fantastic character, first and foremost, as well as a hard-working and talented young player who his comfortable on the ball and suited to what we are trying to do here at MK Dons. He will certainly bolster our squad and add to the quality that we have here."

The news followed the announcement that wing back Peter Kioso has been recalled by parent club Luton Town, who are set to make a decision on his long-term future at the club.

Kioso has been in fine form since returning to the Dons this season, scoring three goals and adding four assists in 18 League One appearances, and had looked to be enjoying his time back where he started his playing career.

Commenting on Kioso's departure, Liam Sweeting said: "Peter displayed real passion, determination and commitment towards playing for MK Dons and we are so appreciative of his efforts and performances this season."

"Ultimately, though, Luton are in control of his situation and we have to respect their decision to recall him at this stage."

Sweeting added: "There are still two weeks left in January and we are working hard to strengthen our squad ready for an important final few months of the season."