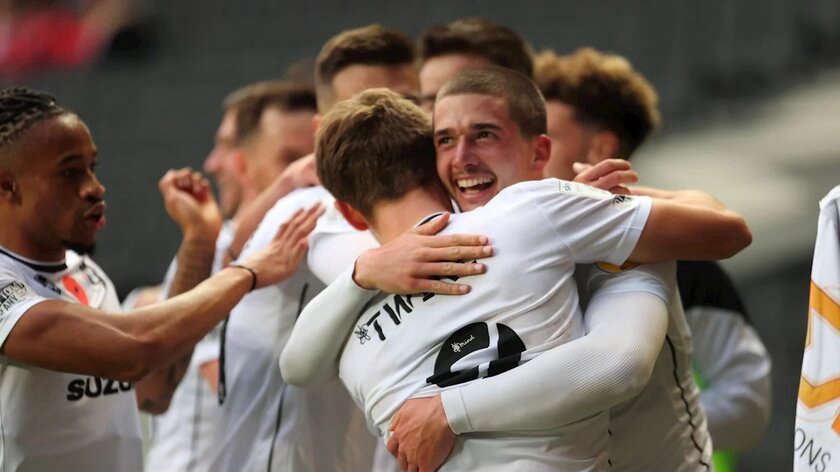 Milton Keynes Dons have climbed to fifth in League One after a convincing 4-1 victory over Cambridge United at Stadium MK.

The match saw reunions on both sides of the pitch, with George Williams returning to Stadium MK for the first time since his departure in January and Harry Darling and Hiram Boateng both in the squad against former Cambridge United teammates.

The Dons started the match lively, putting pressure on Cambridge and continually getting the ball into their box during the opening 12 minutes of play.

The strong start was rewarded when Max Watters, picking up a pass from Warren O'Hora, sent a perfectly placed ball low across the box to pick out Scott Twine, with the Dons' top goal-scorer tapping in a clean goal and putting Manning's side 1-0 up.

The Dons continued to maintain a good level of pressure on the visitors after scoring, and goalkeeper Dimitar Mitov was forced into charging out of his own box to prevent Watters from latching onto a long ball, with the U's keeper crashing into a teammate but narrowly avoiding injury.

It wasn't long, however, before the Dons extended their lead, with Watters picking up a pass from Twine, using his pace to beat the defence and sending a low left footed shot into the bottom corner - giving the Dons a 2-0 cushion after 25 minutes.

Matt O'Riley picked out David Kasumu clean through on goal, giving the Dons an opportunity to increase their lead, but the midfielder pulled his effort well wide and almost looked to be crossing the ball.

Twine had the next chance for the Dons, sending a driven left-footed shot towards Mitov inside the box, seeing the keeper spill the effort and need a moment to recover from the impact of the shot.

The visitors threatened to cut the home side's lead, coming forward in numbers and seeing the ball bobble around the Dons' box until Kasumu put his strength through his clearance, keeping his side away from danger.

Kasumu earned the Dons a free kick just outside the penalty area and with Twine stepping over the dead ball, there was only going to be one outcome.

The Dons' #9 lofted the perfect ball over the wall and struck the back of the net near the top corner, with Mitov unable to do anything, giving his side a 3-0 lead in the 37th minute.

The goal took Twine's season total to eight, more than he has scored in any previous league season, including last season when he scored seven goals with Swindon Town, playing nine fewer matches to do so this season.

Twine almost had himself a hat trick after hitting a low shot from Daniel Harvie's excellent low cross. Mitov was able to get his body in the way but Watters was unable to get the rebound on net, seeing the visitors scramble the ball away.

The visitors were relieved when the referee blew the whistle for half-time, with the link-up play between Twine and Watters causes plenty of problems and threatening to extend the comfortable lead.

The second half started with a nervous moment for the Dons, as Peter Kioso looked to have taken quite a heavy knock and required a few minutes of medical attention.

Fortunately the right back, on loan from Luton Town, was able to stretch off the injury and continue playing, even getting a cross close to the head of Twine and Watters lurking in the box - earning his side a corner.

The visitors grew into the second half and began to put more pressure on the Dons' defence, narrowly missing a looping lofted effort and forcing the Dons to give them a corner with a low cross sent into the Dons box, with plenty of black shirts waiting.

Sam Smith then came close to pulling Cambridge back into the game, running through on goal and forcing Andrew Fisher to make a save down low to tip the ball out for a corner just a few minutes shy of the hour mark.

The U's continued to control the game for a time, with the Dons looking a little lost compared to the previous hour of play, but Kasumu picked out Kioso to send in a threatening shot to keep the visitors on their toes.

Cambridge saw a headed effort hit the crossbar with 15 minutes left in the match, but the effort was subsequently ruled out for offside.

The Dons added to the visitor's misery as Max Watters netted his second goal of the match to extend the lead to 4-0.

Twine intercepted a wayward Cambridge pass and then lofted the ball over the defence and into the path of a charging Watters, who simply smashed a shot at the goal and beat Mitov with relative ease.

There was a faint glimmer of hope for the visitors, as Sam Smith netted with eight minutes remaining in the match to earn some consolidation from a difficult day out.

Moments later and Watters almost had his hat trick, taking the ball and charging in towards goal once again, forcing a save from Mitov at a difficult angle for the striker.

An Aden Baldwin and George Williams clash of heads paused the match for a lengthy spell so both players could receive treatment, with the resulting stoppage seeing the match earn ten minutes of added time when the regulation 90 had passed.

Added time eventually came to an end, with the Dons coming close once more before the final whistle blew. The victory and subsequent results around the league see Manning's side climb up to fifth in League One on the back of back-to-back victories.

The Dons now face Stevenage in their FA Cup first round replay before a return to Stadium MK next Saturday to take on Burton Albion in the league, looking to keep their positive turn of form going.